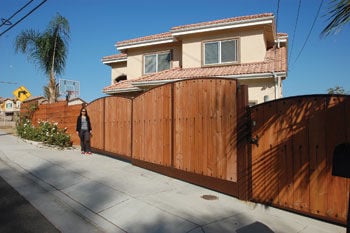 Merle Lewis stands in front of her Fairway Boulevard home in Los Serranos where a 6-foot-high fence was installed to protect her family from golf balls. 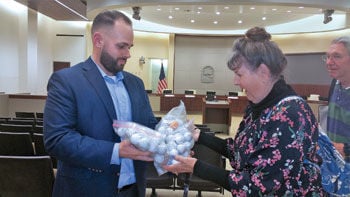 Merle Lewis stands in front of her Fairway Boulevard home in Los Serranos where a 6-foot-high fence was installed to protect her family from golf balls.

Stories of children wearing bicycle helmets in their front yards to protect themselves from errant golf balls and residents installing nets on top of their fences on Fairway Boulevard in Los Serranos were relayed to the Chino Hills Planning Commission at a workshop Tuesday.

The problem of golf balls barreling out of Los Serranos Golf Course, smashing windows and denting garages has been occurring on Fairway and nearby streets for decades but recently came to a head when the code enforcement department asked the city for assistance.

According to a city staff report, some residents have installed screen material that is not allowed and fences that are too high.

Bruce Lewis, who has lived on Fairway for five years, said incidents of golf balls hitting his walls, barely missing his windows, and denting his son’s vehicle prompted him to build a 6-foot-high fence at a cost of $14,000 two years ago.

Mr. Lewis said his neighbor contacted the city to ask if she could also install a fence of that height, which he said resulted in the code enforcement department investigating the matter and issuing him a notice of violation.

The code allows fences that are a maximum of 4-feet high in the front yard and up to 6-feet high on the rear and side yards, said community development director Joann Lombardo.

“We put up the fence because this has become a life or death situation,” Mr. Lewis told the planning commission. “People who don’t live here can’t see it or feel it the way we do.”

He said it was an answer to prayer when community development director Joann Lombardo and code enforcement supervisor Brandi Larson began meeting with him prior to the workshop.

The commission discussed an overlay that would allow properties to have higher fences or additional screening, variances that would require deposits ranging from $2,322 to $6,966 and allowing structures like tarps and temporary screens.

Commissioner Jerry Blum said applying for a variance would be too costly. He said he would like to make the process as simple, easy and inexpensive as possible. He added that if an operation is causing a community disturbance, it is up to the operation to make the changes.

“I recognize that this (golf course) is a business in the community and is invested like anybody else,” he said. “I would hope that something could be worked out between the business, the city and residents.”

Commissioner Mike Stover said the solutions won’t be easy, but residents should have the opportunity to enjoy and defend their property. “We need to keep looking at what is achievable and affordable to the neighborhood that does not result in property value declines,” he said.

Ms. Lombardo said the golf course has not always been the most compatible neighbor over the years, when it comes to errant golf balls. “The city has a long history of attempting to negotiate with the golf course,” she said.

Los Serranos Golf Course has been managed by JC Resorts of San Diego since October 2018.

The general manager said he was not allowed to comment on behalf of JC Resorts but would forward the request to the right person. The Champion did not receive a response by press time.

The issue of errant golf balls has been brought to the attention of the city council over the years. Fairway Boulevard resident John Ruef, who died in 2018 at the age of 80, waged a multi-year campaign against the golf course to no avail.

He placed pillows on his windshields and displayed signs in his yard after a golf ball shattered the window where his 14-year-old granddaughter was sitting in the living room, just missing her head.

He had 60 dents in his garage door and wheelbarrows full of errant golf balls.

Mr. Ruef wrote a letter to the editor in 2010 about a man who was struck in the head and fatally injured by a golf ball on the Los Serranos Course. He submitted petitions to the city and raised concerns about pedestrians walking on Fairway.

He asked the Kramer family, who leases the golf course from Jack Greening, to install fencing on Fairway, similar to the netting along Los Serranos Country Club Drive.

David Kramer previously  responded in interviews with the Champion over the years that Los Serranos Golf Course is obligated to be a good neighbor, but nearby residents are obligated to make sound decisions before purchasing a home near a golf course.