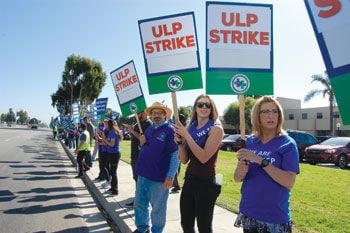 Nurses hold union signs on the sidewalk in front of Chino Valley Medical Center on Walnut Avenue Tuesday. They went back to work Nov. 1 after three days on strike. 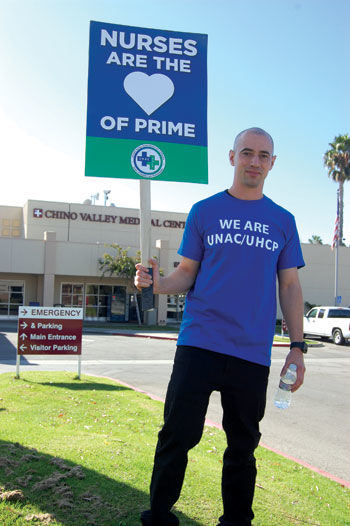 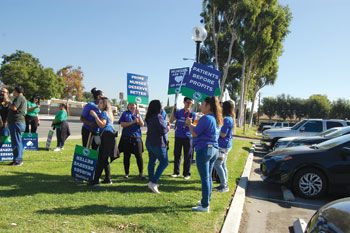 A group of nurses take a brief break from picketing Tuesday.

Nurses hold union signs on the sidewalk in front of Chino Valley Medical Center on Walnut Avenue Tuesday. They went back to work Nov. 1 after three days on strike.

A group of nurses take a brief break from picketing Tuesday.

Chino Valley Hospital Medical Center nurses who are members of United Nurses Association of California/Union of Health Care Professionals went on strike from Tuesday to Thursday to protest what they said are inadequate wages that cause nurses to leave the hospital for higher-paying jobs, resulting in a high turnover rate.

They returned to work Nov. 1.

The 112-bed acute care facility is one of 45 hospitals owned by Prime Healthcare, located at 5451 Walnut Ave.

Chino Valley Medical Center Chief Medical Officer Tim Moran said several nurses did not honor the strike because they enjoy the good working environment the hospital provides. He said those who do not wish to work at the hospital are free to work wherever they want.

Greg Wilson, chief negotiating officer for the nurses’ union, said the turnover rate at the hospital is 47.1 percent, based on statistics from November 2018 to April 2019 obtained from the general counsel of Prime Healthcare, the company owned by Dr. Prem Reddy.

Mr. Moran disputed the number, calling it “fake.” He said fully a third of the hospital’s nurses have been with the hospital for at least five years.

“We don’t have a turnover anywhere near that,” Mr. Moran said.

“The union made no attempt to validate their projections with our Human Resources Department, but these are the facts,” she said.

Registered nurse Richard Gutierrez of Chino Hills, who has worked at the hospital for seven years, said the number one concern of the picketing nurses is the high turnover rate due to non-competitive wages.

Sonia Chesterfield, a registered nurse who has worked at the hospital for 17 years, said nurses love the family-like atmosphere and don’t wish to leave but are seeking higher-paying jobs to pay off student loans and support themselves.

New nurses make $28 per hour, which is $10 per hour less than what other hospitals pay, Ms. Chesterfield said.

She said the nurses haven’t had a cost-of-living increase in 11 years.

The hospital spokesperson said nurses receive merit increases, promotions, or some form of advancement each year.

The nurses joined the union in 2010, followed by legal battles and attempted negotiations with Prime Healthcare, according to information provided by the union.

Negotiations resumed in February and an informational picket was held in August.

Registered nurse Jennie Masaoy, who has worked at the hospital for 13 years, said she trains new nurses, but they leave after a year. “This month alone four nurses quit because they found higher-paying jobs,” she said.

State Senator Connie Leyva, who represents Chino in the 20th district, walked with the picketers on Tuesday.

“What people don’t understand is that a strike is a last resort,” she told the nurses. “You work hard, and you work tirelessly…you love your patients, but you need to be paid properly.”

Assemblyman Freddie Rodriguez, who represents Chino in the 52nd district, brought lunch for the nurses and walked the picket line, stating, “Come on Prime, listen to our nurses.”