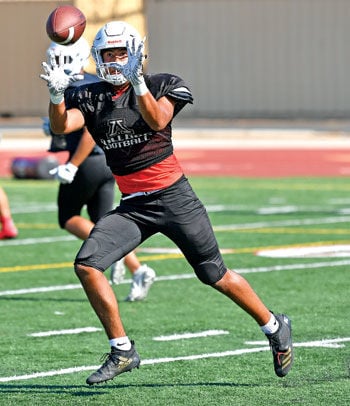 Ayala High receiver Gilbert Duran catches a pass during an Aug. 6 practice. The Bulldogs will kick off the season at 7 p.m. Saturday, Aug. 24 in the annual Battle for the Bone game vs. Chino Hills High at the Ayala High stadium. 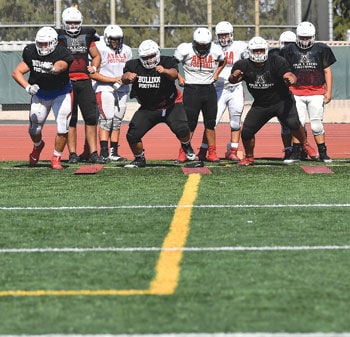 Bulldogs’ linemen go through a drill at a practice. Ayala is returning several players on offense and defense, including four-year starting quarterback Cole McCain.

Ayala High receiver Gilbert Duran catches a pass during an Aug. 6 practice. The Bulldogs will kick off the season at 7 p.m. Saturday, Aug. 24 in the annual Battle for the Bone game vs. Chino Hills High at the Ayala High stadium.

Bulldogs’ linemen go through a drill at a practice. Ayala is returning several players on offense and defense, including four-year starting quarterback Cole McCain.

Looking down at his roster of players and seeing the number of returning starters and key additions to his team, Ayala High fourth-year head coach A.J. Gracia said that depth of talent could lead to the Bulldogs making a deep run in this year’s CIF-Southern Section postseason.

It’s been 11 years since Ayala High won a postseason game in football.

“With all of the returners coming back on the offensive and defensive side of the ball, especially at key positions, it’s made our lives very simple this year,” Coach Gracia said.

Quarterback Cole McCain will start for the fourth straight season and will have a core of receivers to throw to this season with Derek McMillian, Andrew Aguilar and Matthew Munoz back in the mix.

Sophomore brothers Jordan and Jamar Williams, who transferred to Ayala before the season, could also see time at wide receiver.

Running back Xavier Crockett, a junior, however, will not be on the team for the time being after he left school this week to return to Georgia because of family issues, Coach Gracia said.

Crockett rushed for a team-high 862 yards and seven touchdowns, despite playing in only six games in 2018.

He missed Ayala’s first five games last season because he was subject to the CIF-Southern Section’s sit-out period because of transfer rules. Senior Michael Stine III (80 carries, 264 yards and four TDs in 2018) could be among three players to see a large increase in carries in the Bulldogs backfield.

Coach Gracia said there are 30 seniors on this year’s team. “This group of seniors is that same group that we brought in as freshman, which was my first year here. They are a great group and very talented. They went 9-0 as freshman, then we had the next year’s freshman team go 10-0. We’ve got plenty of depth for the first time since I’ve been here,” Coach Gracia said.

Ayala started the 2018 season with a 5-0 record, which included a season-opening victory over rival Chino Hills High in the annual “Battle for the Bone” game.  The victory ended Ayala’s eight-game losing streak to the Huskies.

Coach Gracia said since so many of his players competed in last year’s game, a 14-10 victory for Ayala, they may not have those “first-game jitters.”

“There is going to be a lot of mistakes, some bone-head plays on both sides of the ball because the players are so fired up to win that first game, especially trying to beat your rival,” Coach Gracia said.

After the Chino Hills game, Ayala will get a week off before hosting Diamond Ranch on Friday, Sept. 6. From there, the Bulldogs’ schedule will get quite hectic.

“It’s not going to be easy. I think we will kind of experience what some of the college and pro teams go through. It will be a good test for us physically, mentally and emotionally. Hopefully, it will get us ready for league,’ Coach Gracia said.

“For this year’s senior group, if they really want to leave their legacy at Ayala High School, they’ll want to make a run in the playoffs. But we are taking it one game at a time and we will see where we are at after the 10-game regular season,” Coach Gracia said.