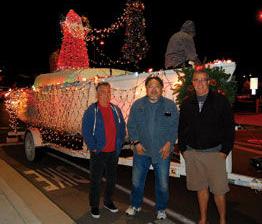 Volunteers for the Boys Republic boat in the 2017 Chino Hills Kiwanis Club boat parade are ready to “launch” from Eucalyptus Avenue near Chino Hills Community Park.

This event has passed

Volunteers for the Boys Republic boat in the 2017 Chino Hills Kiwanis Club boat parade are ready to “launch” from Eucalyptus Avenue near Chino Hills Community Park.

For the first time in the Chino Hills Kiwanis Club boat parade history, announcers will be stationed near the monument sign at Ayala High School to provide commentary and introduce parade participants.

Another new tradition is having a grand marshal.

ABC7 meteorologist Leslie Lopez, who grew up in Chino Hills, was selected for the honor.

The tradition of tossing candy from the boats, however, will no longer be allowed for safety reasons.

Entrants will be allowed to have somebody walk along the curbside to hand out candy.

The residential boat parade, another tradition, is no longer allowed because it was deemed an illegal event last year by the Chino Hills Police Department.

In spite of the decision, some boat owners last year participated anyway so as not to disappoint the Los Serranos and Glenmeade communities who were unaware of the change.

City officials advise attendees to arrive to the boat parade early if they plan to park at Ayala High School. Peyton will close north of Eucalyptus at 5 p.m.

There is limited parking available at Chino Valley Community Church, 14601 Peyton Drive. Through-traffic will not be able to pass the road closure at Peyton and Morningfield Drive, but those who plan to park at the church will be allowed through.

An after-party will be held at Chino Valley Community Church where boat parade winners will be announced.

Residents are encouraged to view the parade route and road closures online by visiting chinohills.org/boatparade.

A few spots are still available for boat entries.