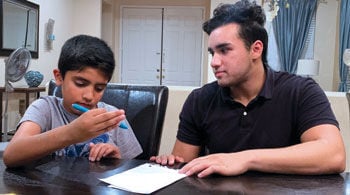 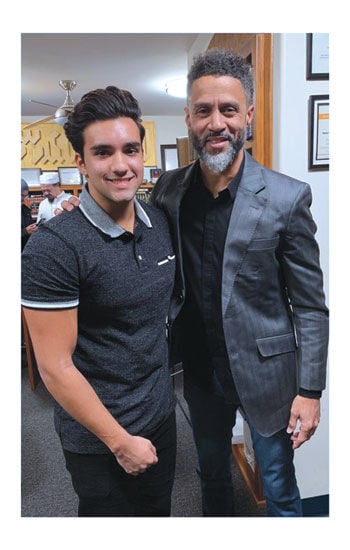 Interweaving math and  sports into something “fun” for school-age children is the way 17-year-old Chino Hills resident Zed Siyed shows gratitude for the blessings in his life as a faithful Muslim.

He believes that youth who struggle with math can become psychologically beaten down, so he has found a way to teach math tricks during the pandemic to get them excited.

Zed has crafted an engaging series of free Zoom sessions for ages 10 to 16 that he hosts from 3 to 4 p.m. every Friday called “COVID-19 Friday Fun Math.”

It is his hope that school-age children will tune in once a week after school to learn math tricks through his “Hoop Math Academy” named for basketball dreams held by many boys.

Some of the topics are basketball statistics, sports probability,  Fibonacci numbers, and infinite sequences.

“I have always been drawn to math,” Zed said. “I want to serve my community by inspiring kids through math.”

After he graduates from high school, he hopes to attend either UC Berkeley or The Wharton School of the University of Pennsylvania to study education and technology. Prior to COVID, Zed was taking his “Divine Beauty of Math” presentations to local mosques and youth groups.

His sessions were a hit, attracting more than 50 tweens and teens at a time who were eager to participate in his interactive math tricks.

“As long as I remember, my parents emphasized that the best way to show gratitude is to serve others,” he said.

As he began to reflect on how he could best do this, he happened to attend a lecture by former NBA star Mahmoud Abdul Rauf, whose basketball career spanned the 1990s and early 2000s.

Mr. Abdul Rauf spoke about dealing with Tourette’s Syndrome and how he discovered Islam. “What spoke to me is how he used his success to help others,” Zed said. After the lecture, he showed Mr. Abdul Rauf his blog of basketball statistical charts and his desire to help others with math. “My confidence grew,” said Zed. “I was motivated to launch the Hoop Math Academy with the goal of inspiring kids to overcome their fear of math.”

Zed began researching the roots of modern math and discovered the hidden role of math in nature, as described by Fibonacci numbers.

“For months, I practiced fun-filled math tricks and researched the crucial role math plays in nature and in the awe-filled architecture of some of the most famous mosques around the world,” he said.

He approached religious director Dr. Ahmed Soboh of Chino Valley Islamic Center “with hope and nerves” and was given the green light to be the speaker at the next youth group meeting. It was a success. From there, he took his roadshow to youth groups and Islamic schools in the region.

“I was fired up to spread my love of math,” he said. “But then COVID hit. Poof went my roadshow.”

Zed said he brooded for a month before pivoting to an online option and created the free Zoom classes.

“With the industry of scientists who are racing toward a vaccine, I hope that I can return to my Divine Math roadshow and expand beyond Muslims to all young people in Chino Hills and beyond who want to see math in a more exciting light,” he said.

Zed is the son of Shazi and Rehan Siyed, who have lived in Chino Hills for the past 10 years. He has a 20-year-old sister Zaina who attends UC Berkeley and a 14-year-old brother, Zamin, an eighth grader at South Pointe Middle School in Diamond Bar.

To sign up for free COVID-19 Friday Fun Math, visit hoopmath.org and click on the COVID-19 Help tab.