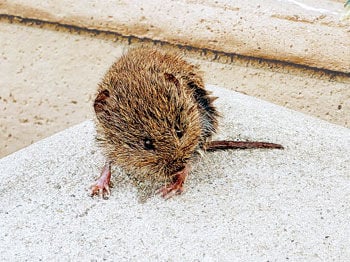 A wet vole that was taken out of a pool dries off.  Chino Hills resident Kevin Marin removed the critter from his pool in the Butterfield area. 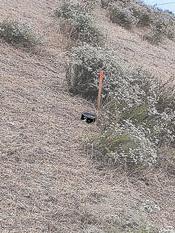 A bait station is shown in Butterfield Ranch placed by the City of Chino Hills in response to concerns about an increase in voles.

A wet vole that was taken out of a pool dries off.  Chino Hills resident Kevin Marin removed the critter from his pool in the Butterfield area.

A bait station is shown in Butterfield Ranch placed by the City of Chino Hills in response to concerns about an increase in voles.

A spike in the vole population in Chino Hills and the region has prompted numerous calls to the city and the West Valley Mosquito and Vector Control District.

A vole is a rodent known as a "meadow mouse" that like to populate urban landscapes with grass and other cover they feed on, according to Janet Hartin, with the UC Cooperative Extension.

They like loose deep garden soil that makes it easier for them to burrow, she said.

"Often, it's the gardeners that seem to have the most trouble with them," she said.

Kevin Marin, who has lived in Butterfield since 1991, said he has never seen so many voles, rodents, and rabbits.

"I began noticing the voles in January and it's been building and building since then," he said.

He has fished out more than 100 from his pool and they are also being found in his neighbors' pools.

Mr. Marin said the voles eat vegetables from his garden and cause landscape damage.

Carol Grisotti, who lives near the Marin family, said she trapped 54 voles in a nine-day period without bait.

Brian Reisinger of the West Valley Mosquito and Vector Control District said the rise in rodents and rabbits are because of the last couple of years' rains and this year's early rains and mild summer.

He said rural and natural areas have had a boom of vegetation that creates shelter and food for the rodents. As food sources dwindle and vegetation dries out, the critters are pushed into urban areas that are watered and still lush, he said.

Mr. Reisinger said the voles do not spread disease to humans. "They are landscape pests due to the damage they can do to plants and yards," he said. Voles feed on a wide range of garden plants.

The City of Chino has reported no increase in the vole population, said spokesperson Vivian Castro.

The stations are checked daily by staff and refilled as needed.

Mr. O'Connor said the bait used in the stations kill the rodents but not other animals that attempt to eat the rodents that succumbed to the poison.

"The city has used bait stations for many years in areas infested with rodents, especially ground squirrels during the summer months," Mr. O'Connor said.

Ground squirrels dig large burrows into the hills in city open space and can cause slope failure due to the numerous holes that can create a honeycomb effect, he said.

Information provided by Ms. Hartin of the UC Cooperative Extension shows that the vole population goes through cycles of low to high numbers with occasional sudden increases that can send numbers soaring up to several thousand per acre.

For assistance, residents may call the West Valley Mosquito and Vector Control District at 635-0307.

For information on voles, visit ipm.ucanr.edu/pmg/pestnotes/pn7439.html.