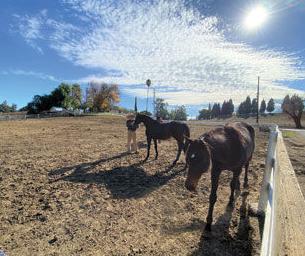 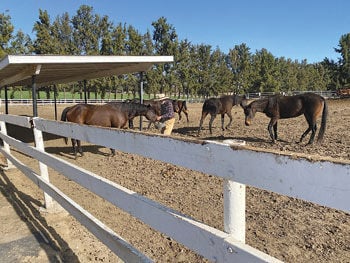 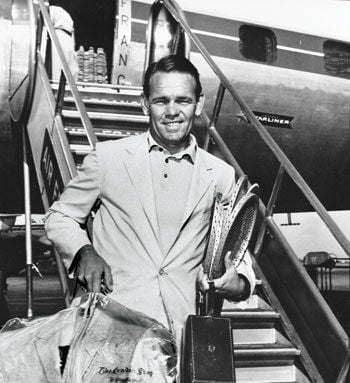 This photo of the late Jack Kramer in the 1950s shows him returning from a Kramer Pro Tour in France, holding Jack Kramer Autograph tennis rackets from Wilson Sporting Goods that was the top selling racket for 35 years, starting in 1948. The photo was provided by son David Kramer.

This photo of the late Jack Kramer in the 1950s shows him returning from a Kramer Pro Tour in France, holding Jack Kramer Autograph tennis rackets from Wilson Sporting Goods that was the top selling racket for 35 years, starting in 1948. The photo was provided by son David Kramer.

What better place for hard-working thoroughbred racehorses to retire then Chino Hills where the skies are blue and the peppermints are crunchy.

The Boys Republic farm at Grand Avenue and the 71 Freeway with its gentle slopes that turn green in spring has been the home of thoroughbred racehorses BeauHaven and her three children Jack’sGlo, GloJack and 5 Perfect Sons, for the past decade.

Mrs. Kramer used to say: “I have five perfect sons—almost.”

The names of Jack’sGlo and GloJack are a combination of Jack and Gloria.

David Kramer of Chino Hills, the oldest of the five brothers, visits the horses every afternoon with peppermint candy and a slice of alfalfa, called a “flake.”

Mr. Kramer is the former general manager of Los Serranos Golf Course on Yorba Avenue and still serves on the board of directors with his brothers and family members.

The family owns and operates the golf course on land that is leased from the Greening family’s Rolling Ridge Ranch property.

Mr. Kramer is carrying the racehorse legacy of his father who became sole owner of the golf course in 1961.

His "Jack Kramer Autograph" tennis rackets had sales of 10 million between 1949 and 1981 and used by John McEnroe, Tracy Austin, Arthur Ashe, Billie Jean King and numerous other tennis players.

“Dad used to go with my grandfather to the race track," he said. "He loved figuring out handicaps and talking to the people at the track," Mr. Kramer said Tuesday while visiting the thoroughbreds.

“He got involved with racehorses in Australia and imported them to California in the 1950s and 1960s,” he said.

In the last 20 years of his life, Jack Kramer had ownership of 3 to 5 racehorses with the late actor Dick Van Patten and a Santa Ana businessman.

Jack Kramer was able to see BeauHaven race in 2008 at Santa Anita but passed away before he could see Jack’sGlo win a race at Hollywood Park the following year.

Mr. Kramer said it was his father’s wish to breed BeauHaven after she rested for a year, so he and his wife Rosie honored that intention. “I said let’s go ahead and breed BeauHaven and see what dad would have gotten,” he said. The product of that union was 5 Perfect Sons.

Mr. Kramer said there is no better place for the thoroughbreds to retire than Boys Republic which he said is at the heart of the Chino Valley and certainly at the heart of Chino Hills.

“This is the treasure of our community that gives back to the bigger community in terms of at-risk inner city youth who have the chance to find themselves here,” Mr. Kramer said.

Chris Burns, executive director of Boys Republic, said the farm setting was chosen by the founders because they believed it provided the perfect environment to develop principles of personal responsibility and accountability in youth.

“We have maintained the farm over the years even though we don’t solely rely upon it for food because those principles are still at the heart of rehabilitation efforts with our students,” Mr. Burns said.

“Now, the animals actually serve a therapeutic function for our students whose inner-city upbringing has often prevented them from even having a pet.”

Mr. Burns said caring for the cows, horses, pigs, and goats develops the empathy necessary for students to understand their decisions in the larger context of how they affect the people around them.

“The horses have added a component to that as an animal that feels more like a pet than just livestock and increases a sense of companionship beyond just caretaking,” he said.

The Kramer horses roam free with Bella, an Arabian that was already on the property before they arrived.

Bella was formerly a show horse and had been traumatized, Mr. Kramer said.

He said the farm has been well taken care of by the Delgado family for many years.

“There is nothing better for the inside of a man than the outside of a horse,” Mr. Kramer said, quoting Winston Churchill.