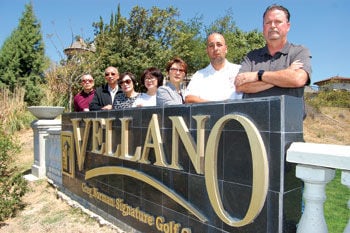 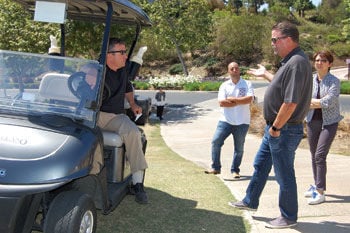 The Vellano Golf Course in Chino Hills was shut down without warning on May 10, less than 24 hours after members of the homeowners’ association informed their board they did not want residential development on the golf course.

“We’ve joined the ranks of communities that have been abused by Western Golf Properties,” said Michael Konrad, president of the homeowners’ association. “We were told they would close the golf course if we did not support their desires.”

Western Golf Properties (WGP) chief executive officer Bobby Heath said the golf course has been losing money for many years and he offered several proposals to the association to make it more financially viable.

“The demand for golf is down, revenues are down, expenses such as the cost of water is up, and there is a massive oversupply of golf courses,” he said. “For the last 10 years, more golf courses have closed than opened.”

The highly-touted 18-hole Greg Norman Signature Golf Course, once the pride of the Vellano community, will soon be fenced after 12 years of operation.

The clubhouse, operated by Wedgewood, will remain open and continue to host weddings, banquets, and special events.

Vellano is located at the end of Woodview Road, west of Peyton Drive.

WPG purchased the golf course last year and has been meeting with the homeowners’ association since that time.

Mr. Konrad said the homeowners’ association was given three options by WGP's Mr. Heath and his business partner Michael Schlesinger:

•Shut down the golf course

Mr. Konrad said Trumark Homes, developer of two housing projects in Chino Hills, attended one of the homeowners’ association meetings to present a high density condo development, which was rejected by the homeowners.

Mr. Konrad and board members met with city officials to discuss WGP’s desire to convert the golf course into homes.

“City officials told us it would be a difficult process because the property would have to be rezoned from commercial recreation to residential,” he said.

With that assurance and after another meeting where homeowners opposed additional homes, the board of directors unanimously voted to reject additional housing, Mr. Konrad said.

Mr. Konrad sent a text to Mr. Heath and “less than 24 hours later, WGP closed the golf course,” he said.

Mr. Heath said WGP presented numerous plans and options to the homeowners’ association board including operating requirements and changes to membership plans to make the golf course economically viable, but they were rejected.

“After over a year of working with the Vellano Homeowners’ Association and presenting numerous options to revitalize and restore Vellano Country Club, the homeowners’ association membership has chosen to close the golf course which has been losing money since the day it opened years ago,” Mr. Heath said.

“We would like to thank the board for their leadership in trying to create a long-term sustainable vision for the course,” he said. “We intend to continue to work with the board on a future vision for Vellano.”

Mr. Konrad said Mr. Heath’s assertion that the homeowners’ association chose to close the golf course is incorrect and absurd.

“The homeowners’ association does not own or control the golf course in any way,” he said. “The association’s homeowners and board chose not to support WGP’s desire to convert golf course land into more homes.”

Mr. Konrad said it was WGP’s decision to retaliate against the community by abruptly closing the golf course and firing the staff.

Homeowner Ben Eramya said the golf course owners have a history of allowing golf courses to fall into disrepair to force homeowners into allowing homes. “They are depressing the area by closing the golf course and using bully tactics until homeowners’ associations are forced to give in,” he said. “They are messing around with the wrong community because we are united.”

Homeowner Jie Yang said he is worried the golf course will become overrun with weeds and present a fire hazard. He said the Champions Club at the Retreat Golf Course in Corona was closed by the same owners and is covered with weeds. Homeowner Shannon Liu said she is disappointed about the closure but is hopeful because the community is united.

Golfers like Craig Bell of Walnut are quickly learning about the closure. Mr. Bell contacted the city and the Champion when he was ready to use a gift certificate to play golf and got a recording at Vellano that the golf course was closed.

“I’m aggrieved when corporate raiders have a scorched earth attitude,” he said. “It’s a sign of the times and it saddens me.”

During the Champion’s interview with residents on Wednesday, WGP project manager Rick Adams approached the group to find out why they were gathered on the golf course.

Mr. Konrad began engaging him in conversation, stating that WGP had not responded to his numerous phone calls since the golf course was shut down. Mr. Adams said he could not comment and asked the group to continue the conversation off the property.

“We were just asked to leave the property in our own neighborhood,” said Mr. Konrad after he shook Mr. Adams’ hand and walked off the golf course. “That’s the tenor.”

Mayor Peter Rogers, who had chosen the Vellano Country Club as the venue for his first State of the City address, said he remembers the excitement when golf course designer Greg Norman arrived in a helicopter to celebrate the opening.

“It’s shocking to see it has come to this after we had such high hopes for the golf course,” Mr. Rogers said.

Mr. Rogers said the city can’t make any assurances about the fate of the project.

He said city officials explained to Mr. Konrad about the hurdles the developer would face including a zone change, attempting to transfer the units to the project site, and the process of working with city staff, the planning commission and city council.

“We are down to a finite number of units remaining on the books and we can’t create more units,” he said. “We have to work within those parameters, so yes, I would say it would be an uphill battle for them,” Mr. Rogers said.