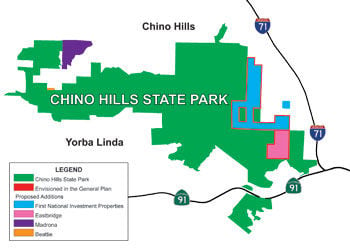 Four proposed acquisitions are shown on a map of the Chino Hills State Park. 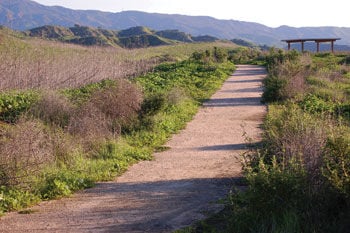 Four proposed acquisitions are shown on a map of the Chino Hills State Park.

Claire Schlotterbeck, executive director of Hills for Everyone, the group that founded the state park, said four properties are eligible to be added to the park.

If passed, the bill would go to the state assembly.

Two properties that could become the eastern ridgelines and have been on Hills for Everyone’s radar for many years now have willing sellers, Ms. Schlotterbeck said.

“We’ve been waiting for this moment for many years,” she said. “These properties have always been part of the ultimate park plan.”

The land includes the 1,200-parcel once owned by the Lamb family of Chino Hills that was sold to first National Investment Properties several years ago, and the Eastbridge property below the Lamb property, consisting of 400 acres.

“The park was designed along ridgeline boundaries so that you don’t know that 18 million people are on the other side,” Ms. Schlotterbeck said.

The once controversial Madrona project, slated for 162 houses on 367 hillside acres in Brea, east of Olinda Village, is the third property proposed for acquisition.

Hills for Everyone fought the project, in which Carbon Canyon Road was the only one way in and out for 19 years, until it was defeated by the California Supreme Court last year.

The land is for sale and the real estate agent has approached Hills for Everyone to find out if there was any interest in pursuing an acquisition.

“That would be very cool,” she said.

The fourth property is an 11-acre site near the Discovery Center in Brea, referred to as the Beattie property, which the owner wants to donate.

The City of Chino Hills’ legislative advocate committee, consisting of Brian Johsz and Peter Rogers, voted to support the bill at its Feb. 19 meeting.

Mr. Johsz said Senator Chang is also proposing another bill, SB 403, that would rename a 1,100-acre portion of the park called the Brea Olinda Wilderness Park after former Assemblyman and State Senator Ross Johnson who died in 2017.

Ms. Schlotterbeck said the late Mr. Ross helped establish the park when he was elected in 1978 and spent the next 20 years garnering funds.

She said much of this was due to the tenacity and faithfulness of Mr. Johnson.

“There would be no Chino Hills State Park without Ross,” she said.