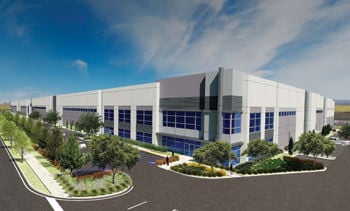 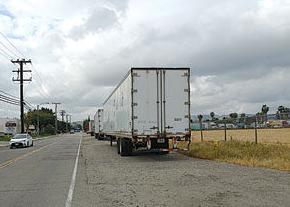 The Chino Valley school district property (at right) is the site of a proposed warehouse. Concerns were raised about the lack of a right-hand turn lane from Yorba Avenue.

The Chino Valley school district property (at right) is the site of a proposed warehouse. Concerns were raised about the lack of a right-hand turn lane from Yorba Avenue.

The Chino Planning Commission Monday narrowly approved a Chino Valley school district proposal for a 59,798-square-foot administration building at 13461 Ramona Ave., and a 325,000-square-foot warehouse on 14 acres on Yorba Avenue, between Schaefer and Chino avenues.

The Chino City Council on Tuesday, May 4 will make a decision on the zone change and general plan amendment which is required for approval.

Developer Xebec Building Company agreed to build both buildings at no cost to the school district in exchange for a 66-year lease on the warehouse.

Offices will be built on both the north and south ends of the warehouse to accommodate one or two users.

Planning Commission Chairman Brandon Blanchard and Commissioners Jody Moore and Kevin Cisneroz voted against the project, citing a lack of a turning lane into the warehouse from Yorba Avenue, which has one northbound and one southbound lane.

Mr. Blanchard said congestion would occur on Yorba without a dedicated turning lane. “I am concerned that traffic along Yorba will accumulate, creating a bottleneck that obstructs traffic flow,” he said.

“Future traffic is the number one concern expressed by our residents,” he said.

Only one resident addressed the commission, citing traffic concerns, particularly from trucks.

Mr. Moore said the district administration building is “a needed project that has been a long time coming,” but he was concerned about increased warehouse traffic.

“I think it’s going to be a bottleneck,” he said. “There needs to be a right-hand turn lane for trucks coming southbound on Yorba. “I’m not sure the long-term growth was taken into considering from the traffic study.”

Mr. Lewis said based on the traffic study, he didn’t think traffic was an issue.

City of Chino transportation manager Dennis Ralls said on Thursday that, “With the project expected to generate no more than 15 actual peak hour truck trips, the need for the pocket was not considered. Further, a right-turn pocket would likely involve right-of-way dedication from adjacent property owners and we cannot condition a project to affect the right-of-way from another property owner.”

He continued, “The right-of-way dedications this project will make along Yorba Avenue with the widened street improvements will be sufficient to accommodate this project and is consistent with the General Plan’s buildout needs for the area.”

A traffic study by Stantec Consulting Services Inc. included truck traffic as part of the analysis.

Mr. Ralls said a daily average of 168 semi-trucks with attached trailers are projected from the industrial site.

Trucks must use designated truck routes to get to the facility. From the south, trucks will use Grand/Edison Avenue, Chino Hills Parkway, Central Avenue, and Euclid to Schaefer avenues.

From the north, trucks will use Riverside Drive to Ramona Avenue to Chino Avenue.

Access to the site will be from three driveways on Yorba. The north and south driveways will accommodate truck traffic and lead directly to the secure yard area at the rear of the site.

All truck and trailer parking stalls will be at the rear of the site, out of public view.

Parking will be adjacent to Yorba along the front of the building as well as at the north and south ends of the property.

There will be parking stalls for 328 vehicles.

The middle driveway is designed for passenger vehicle access only and provides direct access to the parking in front of the building.

The administration offices at 5130 Riverside Drive were previously part of the old Chino High School campus with some buildings completed in 1936.

The school district offices moved into the facility in 1980.

Mr. Stachura said the district will continue to operate transportation and a few other services on Riverside Drive. Ware Malcomb Architects was hired by the developer to design the administration building which will have a modern architectural appearance.