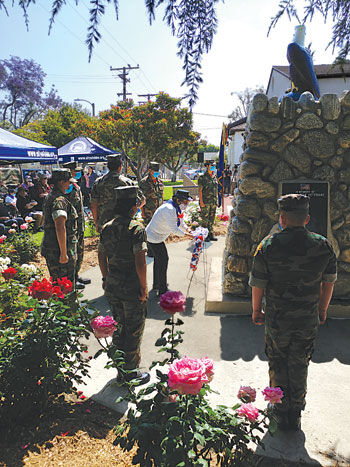 A member of American Legion Auxiliary Post 299 places a wreath in front of the war memorial displaying the names of servicemen and servicewomen from Chino who lost their lives in World War I, World War II, Korean War, Vietnam War, Desert Storm and Iraqi Freedom. 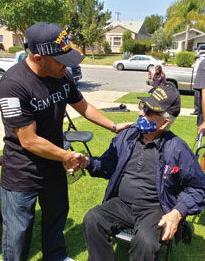 A member of American Legion Auxiliary Post 299 places a wreath in front of the war memorial displaying the names of servicemen and servicewomen from Chino who lost their lives in World War I, World War II, Korean War, Vietnam War, Desert Storm and Iraqi Freedom.

Community members came together Monday to remember the men and women who made the supreme sacrifice for their country.

About 150 people attended Chino’s annual Memorial Day observance held outside the Community Building on B Street.

The event is a partnership between the City of Chino and American Legion Post 299.

The Chino Valley Young Marines raised and lowered the flag to half-mast.

Post 299 Commander Don Avila led the ceremony, which included a wreath laying to commemorate the dead, a 21-gun salute, and the playing of taps.

Mr. Avila said several veterans from the Chino post died last year and they were also in his thoughts.

Ms. Torres said she is seeking justice for 21-year-old U.S. Army paratrooper Enrique Roman-Martinez of Chino, who was murdered last Memorial Day weekend while on a camping trip with seven others on an isolated island in North Carolina. The case remains unsolved.

“The world will little note, nor long remember what we say here, but it can never forget what they did here,” President Lincoln stated in his Nov. 19, 1863 speech on a military battlefield.

Mr. Avila said he heard a World War II veteran was in the crowd and asked Raul Garnica to identify himself.

Mr. Garnica, 98, stood with assistance and was greeted with a standing ovation.

Mr. Avila asked the veteran what branch of service he served in.

From his seat on the lawn, Mr. Garnica shouted, “Army,” which raised more applause.

Several people waited to meet, shake hands, and take photos with Mr. Garnica after the event.

Mr. Garnica returned to Chino, his home since 1937 when his family moved here from Colorado.

“I was happy to serve our county,” he said. “Thank God I came back.”

After the ceremony,   the  Young Marines group were given a ride around the block in the back of an Army truck driven by Cody Jones of the Southern California Military vehicles collectors club based in Chino.

Oakmont of Chino Hills assisted living center at 14837 Peyton Drive held a remembrance ceremony and barbecue for its residents from 12:30 to 1…