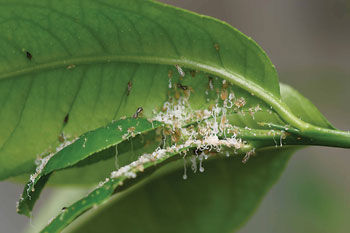 The Asian citrus psyllid is a tiny bug that looks like a grain of brown rice.  In the nymph stage, it produces waxy tubules that are easy to identify. 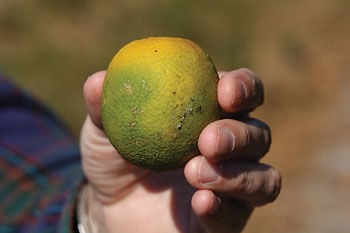 A citrus fruit infested with the Asian citrus psyllid.

The Asian citrus psyllid is a tiny bug that looks like a grain of brown rice.  In the nymph stage, it produces waxy tubules that are easy to identify.

A citrus fruit infested with the Asian citrus psyllid.

Residents in the Chino Valley should not transport their citrus fruits because of a tiny brown insect called the Asian citrus psyllid that is spreading a disease called “Huanglongbing disease” detected in Montclair in November resulting in a quarantine area impacting San Bernardino County.

The disease, known as HLB, has also been detected in 12 fruit trees in Corona which recently expanded the quarantine area to 1,127 square miles encompassing Corona, Norco, a portion of Chino and parts of San Bernardino, Riverside, Los Angeles and Orange counties.

The new portion of the quarantine is bordered on the north by the 210 Freeway, on the west by the 57 Freeway, on the east by Ontario International Airport, and on the south by Chino Airport, said officials from the California Department of Food and Agriculture.

Quarantine maps are available at cdfa.ca.gov/plant/hlb/regulation.html.

No infected trees have been identified in Chino or Chino Hills, according to officials from both cities.

In late November, the city of Chino received notification from San Bernardino County that a tree infected with HLB was detected in the unincorporated area of Montclair, said city of Chino spokeswoman Vivian Castro.

“We were informed that portions of Chino are in the area designated as under quarantine, which is a minimum of a five-mile radius surrounding the site of the plant that contains the infestation,” Ms. Castro said.

The quarantine forbids movement of fruit, citrus plants or foliage, but the fruit is safe to eat and can be consumed on the premises where it is harvested, according to the California Department of Food and Agriculture.

The psyllid looks like a grain of brown rice and produces a white, waxy liquid in the nymph stage. The bugs feed on leaves with their bodies at a 45-degree angle.

Once a tree is infected, it will produce bitter and misshaped fruit and die within a few years, said officials.

Diseased trees should be removed to protect neighbors’ trees and other trees on the property, officials advise.