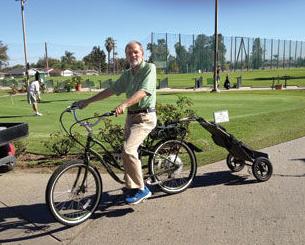 David Kramer tests the idea of a bicycle towing a golf bag on a “surf wagon” at the Los Serranos Golf Course in Chino Hills. He said the golf course didn’t go with the idea because it was deemed too risky. 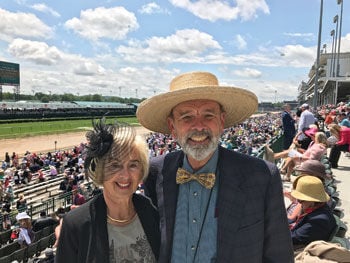 David Kramer and his wife Rosie at the Kentucky Derby Churchill Downs Racetrack in May 2017. He met his wife in Germany when he was teaching tennis and they got married one year later in 1983.

David Kramer tests the idea of a bicycle towing a golf bag on a “surf wagon” at the Los Serranos Golf Course in Chino Hills. He said the golf course didn’t go with the idea because it was deemed too risky.

David Kramer and his wife Rosie at the Kentucky Derby Churchill Downs Racetrack in May 2017. He met his wife in Germany when he was teaching tennis and they got married one year later in 1983.

“A citizen is a person who possesses the virtues of ruling and being ruled. He is able to act morally in morally demanding situations.”

This definition of citizen pretty much sums up the life and philosophical principles of David Kramer of Chino Hills, a man who practices citizenship by way of self-interaction and building goodwill for the benefit of others.

When Mr. Kramer was told last week he was named the Champion’s Outstanding Citizen of the Year for 2021, he was driving into Boys Republic to feed the family’s thoroughbred horses he visits twice a day.

He could be heard informing the person at the gate that he just visited his Aunt Muriel and had already taken his temperature.

Then he responded to the Champion by saying, “I’m no bargain.”

Mr. Kramer will be recognized at the Chino Valley Chamber of Commerce installation dinner at 6 p.m. Wednesday, Oct. 13 at Yanks Air Museum, 15121 Stearman Drive, at the Chino Airport.

David Frederick Kramer, 74, is the eldest of the five Kramer brothers who own Los Serranos Golf Course, purchased by their father Jack Kramer in the late 1950s.

He is known for his philanthropy to Chino Valley organizations, good deeds, acts of kindness, and his long-time service with the Rancho del Chino Rotary Club and Chino Valley YMCA.

Mr. Kramer has the distinction of being photographed inside the Davis Cup when he was age 1.

Fawn Witten, who nominated Mr. Kramer for the award, was ecstatic to learn of the selection.

“I doubt that anyone is more deserving of this honor than David. He truly is one of the most considerate persons alive,” she said.

After Ms. Witten expressed admiration for Mr. Kramer’s dedication to saving his family’s thoroughbred horses, he invited her to join him for a horse feeding.

When he found out she was unable to drive, he picked her up at the Lake Los Serranos Mobile Home Park where she resides.

“The thrill of petting the horses and giving them peppermints took me back to my childhood of growing up with thoroughbreds,” she said.

Mr. Kramer didn’t stop there and made arrangements for her to watch the farrier trim their hooves.

“On each trip to Boys Republic, he drove me around, showing me the facilities and the animals,” she said. “David Kramer truly went above and beyond to bring happiness to an elderly person, who he didn’t actually know.”

Mr. Kramer said what makes a city great is the collection of individuals who work beyond the range of their own personal concerns to make the city great.

“Heck we’re all citizens of the year,” he said. “We’re a family, we love our city, and our city loves us back.”

“David has been with the Rancho del Chino Rotary Club for 25 years,” he said. “He is a passionate advocate for Rotary International’s Peace Conference and participant, both locally and internationally, for peaceful solutions to worldwide issues,” he said.

Another service effort is the Chino Hills Community Foundation, of which he was a founding board member.

Mr. Rogers said Mr. Kramer and the Kramer Family Foundation regularly donate to community causes such as The Let it Be Foundation, Boys Republic, and Ayala and Chino Hills high schools.

The Jack and Gloria Kramer Family Foundation has generally donated significant sums of money to the foundation, Mr. Rogers said.

Mr. Kramer represented the Rancho del Chino Rotary Club on a trip to India with the Peace Conference in 2008 where he visited small villages with no schools. The club partnered with a Rotary Club in Delhi to raise money for an educational program.

It was his second visit to India.

In 1980, he attended a six-week Vedic conference that included a four-day trip in Rishikesh in the Himalayan foothills beside the Ganges River.

Mr. Kramer was a teaching tennis professional from 1975 to 1983 in Coto De Caza and managed two tennis clubs for 10 years in Palm Desert.

“My dad invited me to join the family business in 1991,” he said. He commuted to Los Serranos Golf Course for many months until his wife Rosie said, “If you’re happy, then we will move.”

When asked to share “something the community doesn’t know about him,” Mr. Kramer said, without hesitation, “I taught Transcendental Meditation to Arthur Ashe.”

Mr. Kramer took a course in Transcendental Meditation from the first American-trained teacher in San Diego in 1968 and has been practicing it seven days a week twice a day for 20 minute sessions ever since.

He said it comes as natural to him as brushing his teeth.

“Our nervous system can reach a deeper level than the deepest level of sleep,” he said.

Mr. Kramer joined the Naval Reserve in 1967 because he thought it would be “prudent to be on a boat instead of a foxhole.”

“I went to an 80-day boot camp to start my active duty as soon as possible,” he said. “I finished active duty in 1½ years. It was a terrific experience.”

He served on the USS Sterett, the USS McKean, and was assistant director to the athletic director at Treasure Island in the San Francisco Bay.

Mr. Kramer and his wife Rosie have been married for 38 years. They have two children, Joanna Marie Kramer and Andrew Kramer.