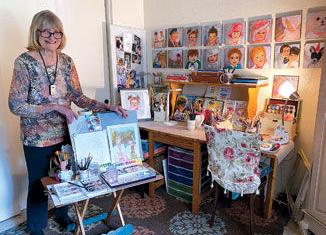 Jackie Marks of Chino Hills has transformed her guest bedroom into an art studio where she has spent hours painting to cope with COVID. 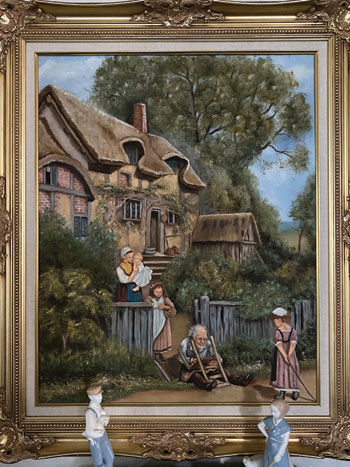 An oil painting with an old world theme, one of dozens of works created by Jackie Marks, is displayed on her apartment wall.

Jackie Marks of Chino Hills has transformed her guest bedroom into an art studio where she has spent hours painting to cope with COVID.

An oil painting with an old world theme, one of dozens of works created by Jackie Marks, is displayed on her apartment wall.

Jackie Marks hasn’t been able to hug her grandchildren since March, so she has painted them into a corner of her home and heart.

The 77-year-old Chino Hills resident has been confined to her apartment for eight months because she has rheumatoid arthritis and chronic obstructive pulmonary disease.

“I have to be very careful,” she said. When the pandemic hit, Ms. Marks began cleaning out her craft closet in her guest bedroom and transformed the room into an art studio where an easel with watercolors and brushes is front and center.

She took up painting in her 30s when her three sons were getting older and created dozens of oil paintings depicting 19th century country scenes and old world style artwork.

Oil paintings with elaborate frames grace almost every wall of her apartment.

As time passed, her rheumatoid arthritis worsened and two years ago, she was unable to paint at all.

After undergoing surgery, she slowly started creating birthday cards in watercolor, and then in March, painted a picture of her great granddaughter.

The goal was achieved, including a great niece and two family dogs, resulting in two rows of paintings that can be considered her first exhibit.

She counts her grandchildren’s spouses as her own, which is why there are 11, she noted.

“Painting my grandchildren brought me closer to each of them,” she said. “It’s how I coped with COVID.”

Like so many other seniors at risk, Ms. Marks said the most difficult thing is not being able to hug her grandchildren, so she had a pillow printed with their photographs and hugs it every day.

Filling in the cuddling gap is Kaylee—her Maltipoo rescued from Priceless Pets.

She saw the dog’s tail and “back end” at a Chino Hills event and fell in love.

Ms. Marks said she is especially sad for young people who are missing out on so much during the pandemic. “Everybody is going through this,” she said. “I just have to say I’m very thankful for my sons who help me out.”

She added, “I’m thankful that I can still move around, I can manage on my own, and I can paint.”