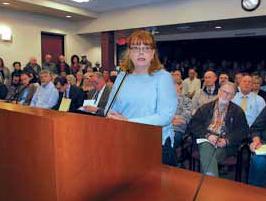 Barbara Wolfinbarger tells the commission that D.R. Horton’s plan could push out her family’s 88-year-old landscaping materials business on Francis and Benson avenues.

Daniel Boyd, vice president of entitlements with D.R. Horton, informs the Chino planning commission that his project will bring housing opportunities to an area that is deprived of new residential development.

Barbara Wolfinbarger tells the commission that D.R. Horton’s plan could push out her family’s 88-year-old landscaping materials business on Francis and Benson avenues.

Daniel Boyd, vice president of entitlements with D.R. Horton, informs the Chino planning commission that his project will bring housing opportunities to an area that is deprived of new residential development.

A proposal to rezone 30 acres of rural land to build 180 residential units in northern Chino created the inevitable clash between a housing developer and a community holding fast to its roots.

After listening to more than 30 speakers in a crowd of 200, the Chino planning commission on Monday turned down D.R. Horton’s plan for a mixture of single family homes, detached condos, and detached homes north of the Chino Promenade where Cinemark Movies 8 is located.

Commissioners Sherman Jones and Harvey Luth said they understood the viewpoints supporting and opposing the project and encouraged the developer to work with city staff and the public for a possible compromise.

They agreed with the findings of fellow commissioners Walt Pocock, Brandon Blanchard, Kathleen Patterson and Steve Lewis that the project was inconsistent with the city’s general plan and not compatible with the surrounding neighborhood.

The matter will come before the Chino city council at 7 p.m. April 4 in a larger setting, possibly the Chino Senior Center. Many attendees were forced to stand outside in nippy weather.

More than a dozen business owners and residents supported the project, stating it would revitalize business in north Chino and attract families to a declining area.

The land is south of Francis between Vernon and Benson avenues.

Vernon Avenue resident Matt Evans, who owns a portion of the property, said 15 homebuilders were interviewed and most of them wanted to build as many homes as physically possible.

Mr. Evans said he and his family have deep roots in the city and did not want high-density homes on the land. “D.R. Horton proposed low and medium density homes. It didn’t feel right to sell to the highest bidder,” he said. “Yes, it meant less money for us.”

Bruce Sakamoto, who lives on Benson, said he purchased a home with his wife 15 years ago and started a family. “We wanted to get away from the hustle and bustle,” he said. “This project will change the whole culture of our neighborhood.”

Alana Carson said the last thing Chino needs is this project. “This is not a prideful moment, it’s a shameful moment,” she said.

“We need to inject new vitality in this part of town,” said Chris Green, Sr., owner of Dickey’s Barbecue Pit on Central Avenue in Chino.

The land is presently zoned for one house per acre and contains grazing land and eight single-family homes. It cannot be rezoned to allow more homes without a vote of the people. Measure M was adopted in 1988 as a growth control measure so it is subject to a Measure M election.

According to city spokeswoman Monica Gutierrez, the council on April 4 may either call for a special election and place it on the ballot, or decline to call for an election.

If the council declines to call for an election, the developer would need to obtain signatures to qualify for a ballot, Mrs. Gutierrez said.