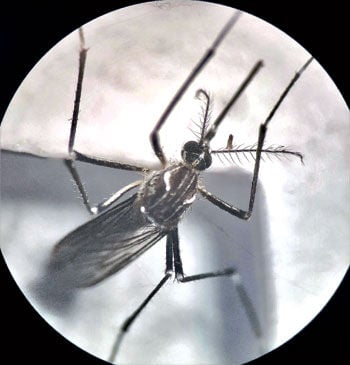 The invasive “Aedes” mosquito, shown under a microscope, is black with white bands. It was first identified in the boundaries of the West Valley Mosquito and Vector Control District in 2015. 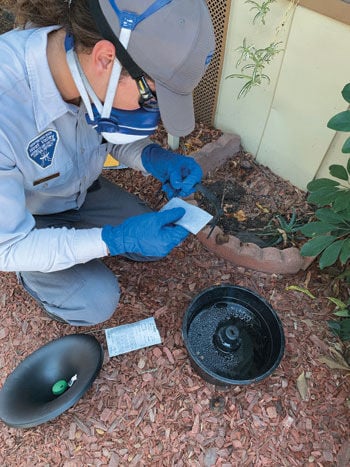 The invasive “Aedes” mosquito, shown under a microscope, is black with white bands. It was first identified in the boundaries of the West Valley Mosquito and Vector Control District in 2015.

The “Aedes” mosquitoes are aggressively biting residents leaving behind red marks that are itchy and sometimes painful.

The black mosquitoes with distinctive white bands on their bodies are considered “invasive” because they are non-native, imported species.

They can potentially carry diseases such as West Nile Virus, Zika and others.

The good news is that there have been no cases of West Nile Virus as of July 24 in the boundaries of the West Valley Mosquito and Vector Control District even though the activity and spread of the mosquitoes is on the rise.

Brian Reisinger of the District said the mosquitoes are small-container, backyard breeders that bite day and night.

The District is dealing with two species: the Aedes aegypti and the Aedes albopictus, he said.

The mosquitoes favor small water sources to lay eggs, even as small as a water bottle cap, which are often overlooked by residents as a breeding place.

They lay eggs in containers inside homes as well.

“As these are backyard breeders, they are harder to detect so we really encourage folks to call us if they are experiencing bites,” he said.

A trap called “In2Care” will be installed by a technician that attracts egg-laying females and kills the emerging larvae and the adult females.

The traps require no maintenance and the technician will visit monthly to make sure they’re working properly.

Mr. Reisinger said the mosquitoes are being noticed more than ever because people are stuck at home and in closer proximity to them.

Mr. Reisinger recommends using a good repellent that can help to reduce bites. They should contain deet, picaridin, oil of lemon eucalyptus, and IR3535.

A local pharmacist recommends using Cortisone-10 ointment, preferred over the cream form, once the bites have occurred and are itchy.