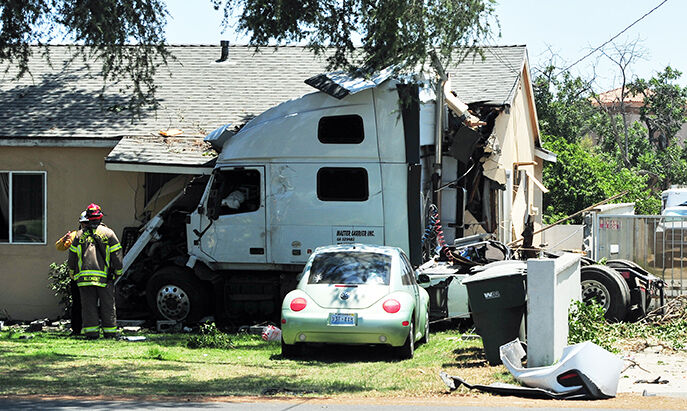 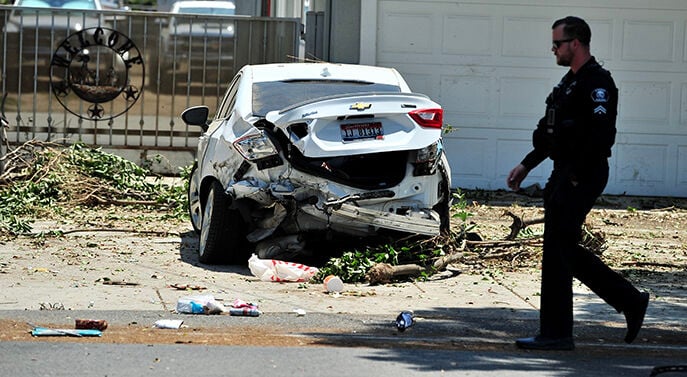 A 27-year-old Chino man was jailed Saturday afternoon on suspicion of leading Pomona Police officers on a pursuit in a stolen semi-truck that ended when the truck slammed through a power pole, struck at least three cars and plowed into a house in the 4100 block of Philadelphia Street in Chino.

No one was inside the home, and no injuries were reported, according to the Pomona Police Department.

Matthew Paul Gonzalez, the suspected driver in the big rig, was taken by police to a local hospital for medical clearance before he was booked into Pomona City Jail on suspicion of grand theft auto.

Pomona police received a call at 12:19 p.m. from the semi-truck owner that the semi had been taken from a tire shop in Montclair.

“The owner of the stolen semi-truck was following the suspect through the City of Pomona,” police said in a statement.

Pomona police spotted the stolen semi near Reservoir and Philadelphia streets, and tried to pull over the driver.

Instead, the driver fled east on Philadelphia Street towards the city of Chino.

The driver lost control of the semi after crossing through the Pipeline Avenue intersection, hitting a utility pole, parked cars, a cinder block wall and a house, located at 4163 Philadelphia St.

The family who rents the home was not inside at the time of the crash but did show up at the scene along with the homeowner. They were offered housing assistance through the American Red Cross, police said.

“Several homes in the area were left without power,” police said. “The house struck by the semi-truck sustained major structural damage and was being assessed by the Chino Valley Fire District.”

Chino Valley Fire Battalion Chief Greg Gabel said that among the firefighters’ concerns were that the truck ran through power lines and getting Southern California Edison to shut down electrical service to the home.

Other utilities, except water, were also turned off.

“We also have a large tow truck in route that is capable of moving large vehicles, like this big rig here. It will be challenging because it is inside the home, so we are going to have to be very watchful and mindful of how that thing gets removed,” Chief Gabel said.

The fire district’s Urban Search and Rescue Team was called to assist in the placement of shoring to help main the integrity of the damaged house until the homeowner can contact their insurance company, Chief Gabel said.

The collisions are being investigated by the California Highway Patrol’s Rancho Cucamonga station. Their number is (909) 980-3994.