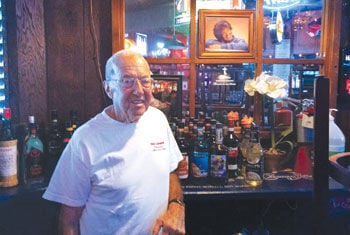 Ed Hart stands beside a memorial of his late wife Gale inside The Corner Bar in Chino that closed permanently July 26.  The couple purchased the business 38 years ago. 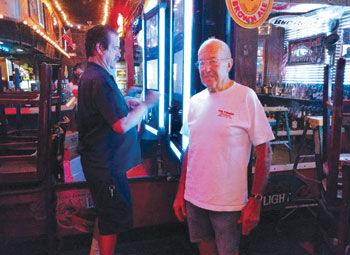 Mr. Hart oversees the clearing out of The Corner Bar in Chino on Thursday while Dennis DeHardt of Primetime Amusement dismantles jukebox equipment.

Ed Hart stands beside a memorial of his late wife Gale inside The Corner Bar in Chino that closed permanently July 26.  The couple purchased the business 38 years ago.

Mr. Hart oversees the clearing out of The Corner Bar in Chino on Thursday while Dennis DeHardt of Primetime Amusement dismantles jukebox equipment.

The Corner Bar will be missed in Chino--in fact it already is.

Located on the southeast corner of Central and Schaefer avenues, the place was a second home to many locals who made new friends and caught up with lifelong ones on a regular basis.

The owner Ed Hart, 83, closed the business permanently on July 26, after the state issued restrictions on restaurant operations for the second time since the coronavirus pandemic began in March.

He reopened for a few weeks when the state’s restrictions were lifted, but said he can no longer afford to pay the bills while waiting until he can open again. “In over 38 years, I never closed for one day. Until this came up,” Mr. Hart said. “There’s nothing you can do.  This thing seems worse, not better.”

Mr. Hart said there is not enough room in the parking lot to set up tables outside.

Last week he oversaw the dismantling of the interior, which  includes a full kitchen, bar and small seating area.

The neon signs were removed from the walls, sold as mementos to customers along with tables and barstools.

The jukebox, which played two songs for $1, was being dismantled on Thursday by Dennis DeHardt of Primetime Amusement.

Mr. DeHardt said he almost cried when he heard about the closure.

He knows all the employees and said Mr. Hart was “easily the nicest bar owner I’ve ever worked with.”

Mr. Hart said the business was thriving before the pandemic.

The serviceman confirmed the juke box was one of his most profitable.

“I dropped a lot of my money in there,” Mr. Hart joked.

“We are all broken about this,” she said.

“We were doing all the measures, including sanitizing and masks.”

Mr. Hart ran a tight ship, she said, and the bar was known for its cleanliness.

A group of well-known community members, who Mr. Hart declined to name, met every Sunday from 6 to 10 a.m. for the last 20 years to watch the Sunday News and drink coffee.

“People were begging him to keep it open. They offered to pay the rent, utilities and everything,” Mr. Proctor said.

For the last several years Mr. Proctor has been a driver for Mr. Hart, who has macular degeneration.

Mr. Hart used to be a hot-rodder.

“One of the best hot-rod builders around,” Mr. Proctor said.

They were childhood friends and later business partners in the corrugated cardboard industry.

Mr. Hart, a Chino native, was born on East End before it was incorporated by Chino.

He met his wife, Gail, at Narod’s nightclub on Central Avenue.

Mrs. Hart ran the business for about ten years before her husband joined her. He remembers the area at that time was undeveloped with strawberry farms and corn fields. Mr. Hart said the clientele at The Corner Bar was “excellent and never caused any problems.”

His rule was, “If you mess up once you’re done- no second chances.”

“That stopped a lot of silliness,” he added.

Bernadette Helton owns the property which includes the attached C and S Liquor store in the same building.