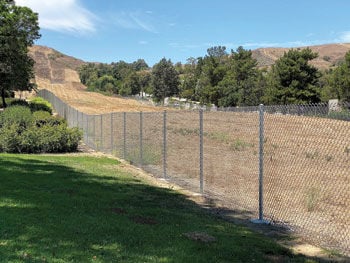 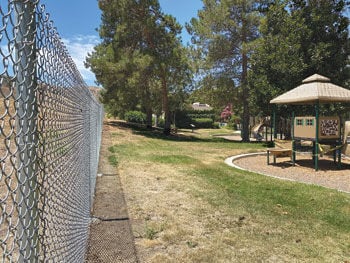 A chain-link fence separates the playground, basketball and parking lot portion of Hope for the Hills Park from the tennis courts. It will be removed now that Edison has declared it safe to walk over the buried power lines.

A chain-link fence separates the playground, basketball and parking lot portion of Hope for the Hills Park from the tennis courts. It will be removed now that Edison has declared it safe to walk over the buried power lines.

Southern California Edison will allow the City of Chino Hills to provide a public access pathway through the fenced off right of way at Hope for the Hills Park at Avenida Cabrillo and Eucalyptus Avenue.

The announcement was made after a closed session city council hearing July 14 in which the final litigation matters between Edison and the city were worked out on logistical and right-of-way issues when the Tehachapi power lines were buried six years ago.

Two years after a 2014 celebration was held to rename and dedicate Hope for the Hills Park, Edison announced it would not allow a pathway through the park, despite allowing other pathways to cross over buried power lines in the underground corridor.

Hope for the Hills members cried foul, stating that Edison was exacting revenge because of the role it played in bringing down the 200-foot towers and forcing Edison to bury the lines instead.

Edison then installed a chain-link fence that virtually split the park in two by cutting off access to the tennis courts.

The utility stated at the time that it had a safety concern because burying the lines was a new technology. Edison said it would revisit the issue in a couple of years.

Although the City of Chino Hills vowed to fight Edison when it first made the decision to split the park in two, the matter was dropped because the fight would have been too expensive and the California Public Utilities Commission did not support the city’s position that the park should remain whole, said city officials.

During settlement proceedings involving the Western Transition Station case, which included 17 parcels that made up the non-street property of the underground corridor, including the portion over Hope for the Hills Park, the city periodically asked Edison to revisit the issue, said assistant city attorney Elizabeth Calciano.

“When we were finalizing the settlement, we asked again, and this time Edison stated that it had determined it was safe enough to allow the path, if the city followed specific safety protocols,” Ms. Calciano stated.

Those protocols are listed in the settlement, she said.

“With the passage of time and experience with the underground corridor, Edison is now comfortable that the safety issues have been addressed,” Ms. Calciano said.

It was seven years ago this month that the California Public Utilities Commission ordered Edison to take down the 200-foot towers it was installing in Chino Hills.