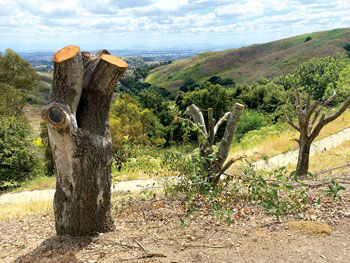 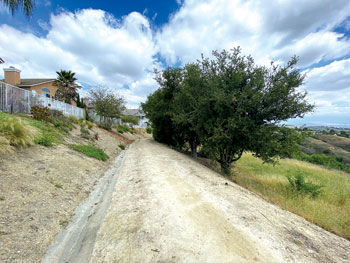 Houses on Rancho Hills Drive (at left) overlook the Ridgeview Loop trail where trees (on right) have grown so tall they obstruct the view of the city.

Houses on Rancho Hills Drive (at left) overlook the Ridgeview Loop trail where trees (on right) have grown so tall they obstruct the view of the city.

Dozens of Coast Live Oaks and Toyon bushes on Ridgeview Loop trail behind Rancho Hills Drive were discovered hacked to almost stumps in two incidents over the last two weeks.

City spokesperson Denise Cattern called it the “worst case of destruction and vandalism” that crews have seen on city property.

“It is never okay to chop down trees that are not on your own property,” Mrs. Cattern said.

The vandalism occurred behind homes on the east side of the 1500 block of Rancho Hills Drive in the vicinity of Sunset Park.

The oaks are more than 25 years old and were planted by the developer when the housing tract was built in the early 1990s, said Sean O’Connor, the city’s maintenance and operations manager.

The first incident was witnessed by Chino Hills resident Robert Marquez who walks the trail with his dogs every day.

He said he came upon what appeared to be day laborers cutting off limbs and observed a couple of neighbors running out of view and hopping over their backyard fences.

He called the police and posted photos of the cut trees to a neighborhood social media platform.

“I was surprised and saddened to see what happened,” Mr. Marquez said. “They were mature trees that provided shade. It’s not the same trail anymore.”

The Public Works Department was also contacted by residents on both occasions.

City manager Benjamin Montgomery said the city is investigating the incidents and will seek prosecution of the case to the greatest extent of the law.

According to Mrs. Cattern, the estimated value of the lost assets is more than $91,000.

She said the mature trees were established and required no irrigation.

A husband and wife couple, who also walk the trail regularly, videoed the vandalized trees and posted it on the same social media platform, which caused an outcry from residents.

The couple pointed out that a few people who live on Rancho Hills Drive attended a city council meeting in February complaining that the trees along the trail were obstructing their views.

A video of the Feb. 11 meeting showed residents telling the council they moved to Rancho Hills Drive for the stunning backyard view but as the years passed, the trees grew so tall their view was obscured.

They asked the city to trim the trees, stating they were a fire hazard, attracted rattlesnakes and coyotes, and could invite crime.

While on the trail Wednesday with residents, the Champion observed a man picking up tree trimmings from the trail and transporting them over his backyard fence.

The man was confronted by the resident who then called the Chino Hills Police Department after which two deputies arrived.

Mrs. Cattern said the city is “thankful for the residents who reported this blatant vandalism with concern about the loss of the trees, which really belong to the community.”