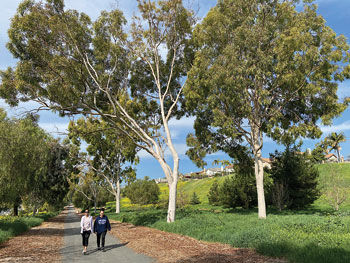 Lemon-scented gum trees or “Eucalyptus Citriodora” are shown on the right-side of the Madrugada Trail on Calle San Marcos at Grand Avenue. The eucalyptus trees contain smooth white bark and give off a citrus aroma. 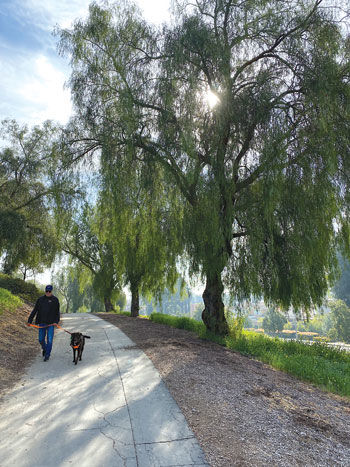 Lemon-scented gum trees or “Eucalyptus Citriodora” are shown on the right-side of the Madrugada Trail on Calle San Marcos at Grand Avenue. The eucalyptus trees contain smooth white bark and give off a citrus aroma.

The city of Chino Hills doesn’t need a designation to prove that trees are one of its most cherished resources with 42,500 city-owned trees lining trails, parks, and medians.

The Arbor Day Foundation recently notified the city that it has been recognized as a “Tree City USA” after staff submitted an application last fall reflecting its commitment to the urban forest through the standards set forth by the national foundation, according to maintenance and operations manager Sean O’Connor.

The project was part of the city’s Healthy Hills initiative.

The next Arbor Day event is being planned for April, Mr. O’Connor said.

Two Tree City USA roadway recognition signs provided by the Arbor Day Foundation will be installed by staff at the 71 Freeway entrances at Grand Avenue and Butterfield Ranch Road.

The city has held numerous Earth Day events over the years with tree planting projects in nature parks such as Hickory Creek and Strickling.

The city has also applied for and received grants for tree planting projects in Hollow Run Park, the Madrugada Trail, a portion of Peyton Drive between Grand and Chino avenues, and on Chino Avenue between Peyton Drive and Rock Springs.

Re-certifications are required each year to maintain the designation, according to the Arbor Day Foundation website.

The city of Chino was named a Tree City USA in 1989 and has achieved the designation 25 times, according to a list compiled by the Arbor Day Foundation in 2018.

An updated list of Tree City USA cities is expected to be released this June.