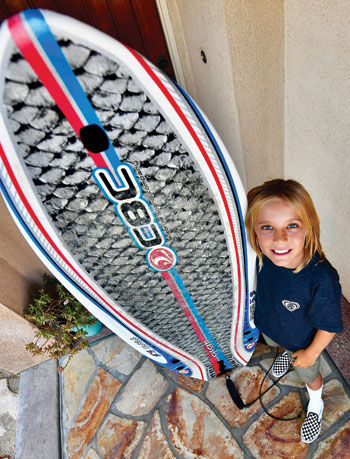 Chino Hills resident Colton Nordella used his surfboard to help rescue a stranded swimmer Sunday afternoon at Doheny State Beach in Dana Point. A lifeguard patrolling the beach told the 10-year-old he made a “good save.”

Colton Nordella is seen using his surfboard to save the adult swimmer in the strong surf.

Chino Hills resident Colton Nordella used his surfboard to help rescue a stranded swimmer Sunday afternoon at Doheny State Beach in Dana Point. A lifeguard patrolling the beach told the 10-year-old he made a “good save.”

Colton Nordella is seen using his surfboard to save the adult swimmer in the strong surf.

The 10-year-old from Chino Hills and fifth-grader at Butterfield Ranch Elementary School was enjoying his last day of summer vacation with a day of surfing when he and friends –  Regan and Addie Ramirez –  came across a man in his 50s asking for help because he was having trouble staying above the water.

“The waves were bigger than normal that day,” Colton said. “The man was struggling, and he asked if he could hold onto my board for a little bit. I was like ‘what do I do?’ I was telling him to calm down because there were some big waves coming.”

Colton, with the leash of his surfboard still attached to his ankle, helped get the man onto his surfboard as Regan swam over to assist Colton.

“It was deep water. When the waves came, I had to go under because they were big,” Colton said.

Colton continued talking to the swimmer, described as a 5-foot-8 man and weighing around 200 pounds, as they began swimming to shore.

“I was so nervous. My heart would not stop pounding,” Colton said. “The man was really out of breath.”

A short time later, a lifeguard got into the water and helped pull Colton and the man to shore.

The lifeguard was proud of Colton’s heroic effort, telling the boy “good save.”

Colton, Regan and Addie wanted to spend their last day before school started Monday at Doheny State Beach in Dana Point with their families and friends, enjoy a day of surfing, something Colton only took up this summer.

They had visited the beach two to three days a week.

Colton’s father, Frank Nordella, was using his telephoto lens to photograph the three children in the water and noticed a guy trying to talk to the kids, said Colton’s mother Elaina Nordella.

“My husband looked through his lens to see what was going on and noticed the guy was struggling to stay above water,” she said. “It was weird that he was out there by himself without a board. He had come from the other side of the beach and was being pulled out by the current.”

She added she is extremely proud of her son, and glad he was not only able to save the man, but to save himself, too.

“It was an eventful day,” Mrs. Nordella said.