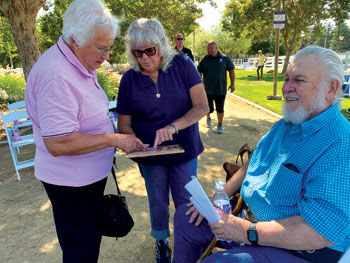 Bill Hughes (right) a member of the McCoy Trust and longtime friend of Frank and Helen McCoy enjoys the community spirit at the birthday celebration for Mrs. McCoy. At left is Gayle Reis of Hemet, another longtime friend of the McCoys who used to ride and show their horses. She is sharing old photos with Mary Ann Hughes, wife of Mr. Hughes. 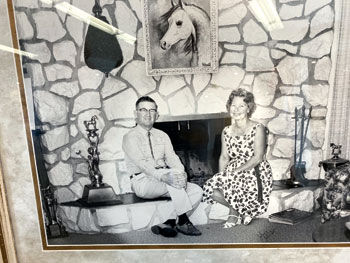 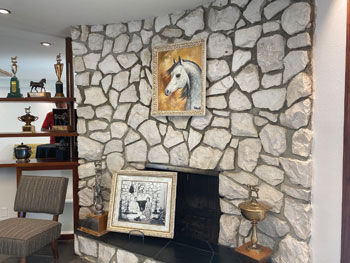 Bill Hughes (right) a member of the McCoy Trust and longtime friend of Frank and Helen McCoy enjoys the community spirit at the birthday celebration for Mrs. McCoy. At left is Gayle Reis of Hemet, another longtime friend of the McCoys who used to ride and show their horses. She is sharing old photos with Mary Ann Hughes, wife of Mr. Hughes.

Horses trotting in the arenas underneath the warm sun in a clear sky evoked the Chino Hills of yesterday when horses were more common than houses, during last Friday’s celebration at McCoy Equestrian Center on Peyton Drive.

The event honored the late Helen McCoy on what would have been her 110th birthday and celebrated her gift of 20 acres of land to the city.

McCoy Trust member Bill Hughes, a longtime friend of Helen and Frank McCoy, was given a check of $1 in a frame with a nostalgic photo and inscription by Mayor Brian Johsz for the purchase of the property after its 25-year lease.

A good-sized audience, cooled down by a light breeze and shady trees, was riveted by Mr. Hughes’ recollections of working for Frank McCoy at Arabian horse shows and helping him breed mares.

The McCoys moved to Chino Hills in 1963 to continue raising and breeding their prize-winning Arabian horses.

The couple traveled to Morocco, Cairo, Japan, New Zealand, and Australia with the World Arabian Association.

Mr. Hughes met the McCoys in the 1960s and lived close enough to walk to their ranch when help was needed.

“I spent a lot of time in Friendly Frank’s Tavern,” he said. “It was a lot of fun. It was a different time.”

He said Frank McCoy had more stories than anybody else and if he didn’t have one, he’d make one up.

When the McCoy facility was under construction, Mrs. McCoy continued to live in her home and loved to ride around in her golf cart.

When the barn was converted into a community center and celebrations were held, she enjoyed watching the people.

“She loved the parties,” Mr. Hughes said. “She’d drive by just to see the people. They were all her people.”

She lived in her original home until she passed away in 2003 at the age of 96.

Mr. Hughes said he is very impressed with what the city has done with the McCoy Equestrian Center.

“She’d be real excited to see what’s going on here,” he said.

Mrs. McCoy supplemented her donation of land with a $2.3 million contribution that was overseen by the McCoy Trust.

The funds went toward the conversion of the barn to a community center, the addition of a third arena, permanent restrooms, a new storage shed, and more.

Over the course of the 25-year lease, the city contributed $2.4 million towards facility enhancements, Mayor Johsz said.

He said the council is committed to preserving McCoy’s equestrian heritage for many years to come.

Councilman Peter Rogers spoke about safeguarding the desire of the late Mayor Mike Wickman who, upon appointing him to the Parks and Recreation Commission in 1998, asked him to watch over the development of the facility.

Mr. Rogers attended Equestrian Committee meetings alongside Mr. Hughes, Mrs. McCoy, and trustee Denny Gunnels who could not make it to the celebration.

He said he is committed to bring more equestrian uses to the center which will be a slow but steady process.

Mr. Rogers thanked former McCoy coordinator and equestrian expert Jana Dale, who was in attendance, for her work in bringing shows to the center.

She has advised the city about changing trends and how to reach out to the right kinds of horse groups because many of the groups that once hosted the shows are no longer in existence.

After the ceremony, residents visited the horses and toured the barn and the McCoy residence for a look at trophies, photographs, and memorabilia.