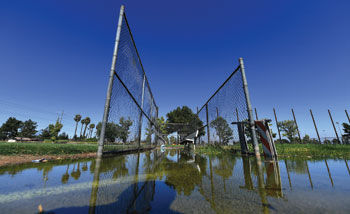 New dugouts will be installed on Fields 5 and 6 at Ayala Park in Chino as part of a $1 million improvement project on the two fields. The park is home to Chino American Little League baseball. 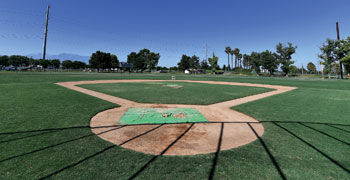 New dugouts will be installed on Fields 5 and 6 at Ayala Park in Chino as part of a $1 million improvement project on the two fields. The park is home to Chino American Little League baseball.

The Chino city council approved $1 million Tuesday for the second phase of improvements to baseball fields 5 and 6 at Ayala Park, the home of Chino American Little League baseball.

Phase 1 took place in 2018 after Chino American Little League was forced from its longtime home at Chino High that is being rebuilt.

Work will begin soon on demolishing and removing the existing dugouts, replace fencing and hardscape, installing a concrete seating area, replacing irrigation and landscape and repairing an existing storm drain below home plate on Field 6.

New dugouts and bullpens will be installed as will a batting cage on Field 5. The work will also include new baseline and backstop fencing, dugout seating, bat holders, two scorekeeper boxes, bleachers, a flag pole, and a new T-ball field on the southeast corner of Field 6. The T-ball field will include a backstop, fencing, dugout with benches and a walkway that will connect to an existing walkway next to a restroom.

The field will have lights installed from a $121,000 grant after Chino American Little League won a "Safety Awareness Program" for its safety plan in 2018.

City documents show 11 companies placed bids for the work. By a 5-0 vote, the contract was awarded to Micon Construction, Inc., which was the lowest responsible bidder.

Little League teams have not played since March because of the coronavirus pandemic.

Games will resume once given the approval by Little League Baseball officials.