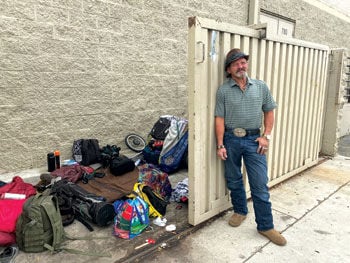 David James stands outside his place of residence, a trash enclosure behind a store in Chino Hills. 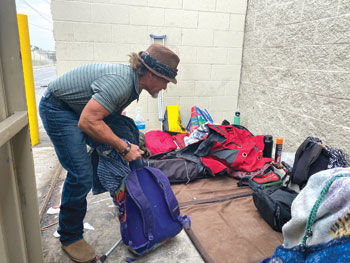 Mr. James moves aside his belongings in a trash enclosure where he resides to make enough room to set up a folding chair. 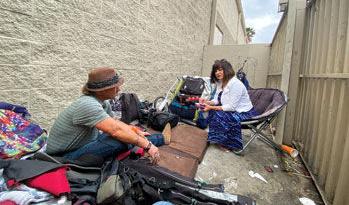 An acquaintance of David James took this photo during the Champion interview.

David James stands outside his place of residence, a trash enclosure behind a store in Chino Hills.

Mr. James moves aside his belongings in a trash enclosure where he resides to make enough room to set up a folding chair.

An acquaintance of David James took this photo during the Champion interview.

“Hey, are you up yet?” shouted an acquaintance as he peered over a trash enclosure in the back parking lot of a store in Chino Hills on Chino Hills Parkway and Pipeline Avenue.

There is no bin there, just himself, so he has room to spread out his belongings including two carts he pushes around looking for items to use or sell.

In the pile are blankets, duffel bags, backpacks, a set of golf clubs, a folding chair, and beer.

He has lived in various locations in Chino Hills for the last seven years.

Folks who frequent the back parking lot stopped by Mr. James’ enclosure last weekend, including “Sally,” who most residents know by her wooded wreaths in the shape of hearts she affixes to chain-link fences throughout the city.

Some were homeless and some were “collectors” who scour dumpsters for useful items.

“Don” sat nearby with a grocery cart containing his two dogs lying on blankets.

A scrap metal collector driving his truck through the area stopped by, pointing out where groups of homeless people reside in the wash.

The group said they are not well-received. Mr. James said people look at him when he’s pushing his carts and tell him to “get the hell out of Chino Hills.”

He said he has no rights and due process is gone.

His wish list for amenities in Chino Hills include a laundromat, an alcohol education and recovery center, and family counseling.

When told the City of Chino Hills reported two homeless people in the Point-in-Time count, the group burst out laughing.

Mr. James said there are at least seven to 10 in his parking lot alone, with many more around the city.

The group said homeless people in Chino Hills sleep on hillsides, in the channel, under awnings, and on sidewalks in front of stores, leaving when the sun comes up.

Sgt. Laura Addy of the Chino Hills Police Department said the amount of homeless can fluctuate from day to day, with many traversing back and forth between bordering cities.

The annual Point-in-Time Count conducted in San Bernardino County is a one-day, street-based count to identify how many people are homeless.

It takes place every January, with community planning beginning in September of the previous year.

It typically requires the involvement of key community members and volunteers to help organize and implement the homeless count.

“Some of the persons you may think of as homeless may not meet the requirements to be officially counted,” Sgt. Addy said. “We have a handful of persons in our city who frequent the streets and may appear homeless but actually have residences in Chino Hills that are fixed and accessible to them as a night-time residence.”

“Stores throw away a lot of food,” he said.

He’s uneasy when leaving his enclosure because he said, “people are always scamming on my s---.”

The homeless often have territorial encounters with people who salvage. Mr. James said he coats the top of his enclosure with butter or oil to prevent people from jumping in, but it doesn’t always work.

Mr. James said he has been homeless on and off for most of his life. His mother had his brother when she was 14. He found out who his dad was much later in life.

He said he was bullied from the time he started school and had to fight all his life to survive. He became homeless for the first time at the age of 15.

He has worked in sheet metal, at a fabric plant, roofing, and landscaping.

Sgt. Addy said during encounters with the homeless, the police provide them with an offer of shelter.

If the offer is rejected, they are given a guidebook of resources provided by the sheriff’s department “Homeless Outreach and Proactive Enforcement (HOPE) team.

“All homeless people are referred to the HOPE team, whose goal is to transition these individuals to permanent housing,” she said.

On Monday, Mr. James was seen packing up and his enclosure was empty for three days.

On Thursday afternoon, he was back.