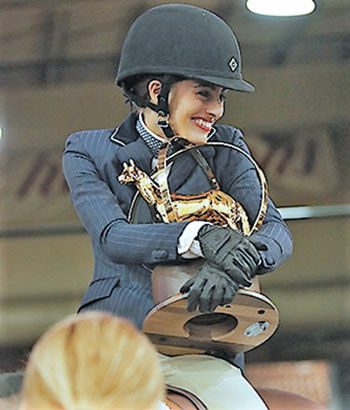 Alessandra and Talk Southern to Me got their start at Hillcrest Equestrian Center in Chino Hills.

Youth competitors must qualify for the event by earning a predetermined number of points to secure a spot in each of the classes, representing English, western and halter disciplines or earn an invitation through their state or provincial affiliate.

Alessandra is a biology major at Azusa Pacific University where she is pursuing a career in veterinary medicine.

Cassandre Ehrle, 16, of Chino Hills, recently competed at the Youth World Championship in Oklahoma City in the all-around events with her two horses, Daizy Duke and Strut UR Stuff under the guidance of trainers Kellie Hinely and Deann Hudson at Trendsetter Performance Horses in Chino Hills.

Strut UR Stuff placed 11th in Aged Mare Halter and made the semi-finals in the L2 western horsemanship class, the largest event at the World Show.

As president, she coordinates youth world events for the California teams, along with youth activities and fundraisers.