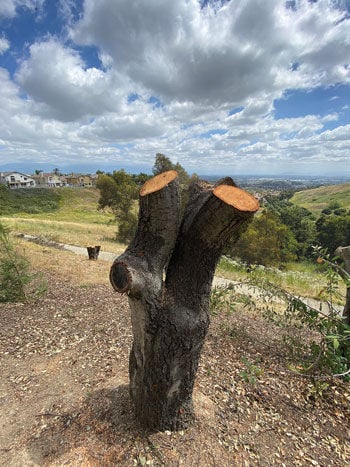 A chopped Coast Live Oak no longer provides a shady canopy on the trail behind Rancho Hills Drive. 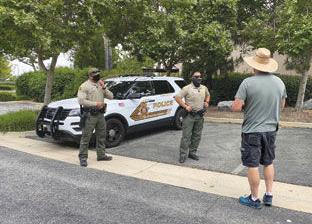 Mike Taber of Chino Hills called the Chino Hills Police Department in May after witnessing a resident of Rancho Hills Drive gather tree clippings from the Ridgeview Loop trail and hoist them over his backyard fence. 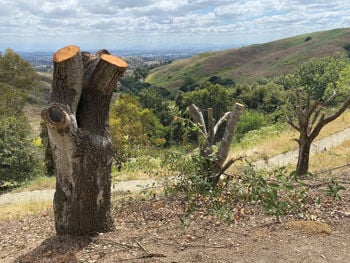 A chopped Coast Live Oak no longer provides a shady canopy on the trail behind Rancho Hills Drive.

Mike Taber of Chino Hills called the Chino Hills Police Department in May after witnessing a resident of Rancho Hills Drive gather tree clippings from the Ridgeview Loop trail and hoist them over his backyard fence.

Four Chino Hills residents accused of cutting 25-year-old oak trees on a city trail behind their homes have been charged by the San Bernardino County District Attorney’s office with willfully or negligently cutting plant material on public land without a written permit from the owner.

The four misdemeanor criminal cases were filed July 15 and charges the residents with removing nine Coast Live Oak trees valued at $18,630, according to the criminal complaint provided by Mike Bires of the district attorney’s office.

The alleged vandalism occurred on the Ridgeview Loop trail behind homes on the east side of the 1500 block of Rancho Hills Drive in the vicinity of Sunset Park.

The misdemeanors are punishable by a fine of not more than $1,000, county jail time for up to six months, or both, said Chino Hills Police Sgt. Michael Warrick.

Sgt. Warrick said police conducted an investigation and developed information leading to the identification of suspects after becoming aware of the incident May 11.

Cutting trees on public land is a violation of Penal Code 384a(2), he said.

The case was submitted to the district attorney and charges were filed against the four parties, he said.

“Ultimately, guilt or innocence and potential penalties are worked out at the court level and that process is ongoing,” Sgt. Warrick said.

The vandalism of 26 Coast Live Oaks and 23 Toyon bushes occurred May 3 and May 9, according to officials with the City of Chino Hills.

Nine of the oaks were completely destroyed.

The Coast Live Oak is a native species protected by the State of California and the city’s municipal code, said Chino Hills operations and maintenance manager Sean O’Connor.

The oak tree is featured on the city logo.

On Feb. 11, several residents of Rancho Hills Drive attended a city council meeting, including at least two of those charged, to express concerns about the trees.

Residents said they moved to Rancho Hills Drive for the stunning views but as the years passed, the trees grew so tall their views were obscured.

They asked the city to trim the trees because they presented a fire hazard and were a public safety concern.

“When the city council refused their request, the criminals did what criminals do,” said Chino Hills resident Mike Taber, who contacted Chino Hills Police after seeing the chopped trees when walking the trail.

He said their arrogance did not stop with one incident but even after the police were called, they returned to cut down more trees. “These criminals clearly believed that the risk or fine would be worth the views gained from their balconies,” Mr. Taber said.

He believes the residents should pay punitive costs to ensure it never happens again and to dissuade residents from cutting down oak trees because leaves are dropping in their pools.

What these four, charged individuals chose to do is beyond shameful and selfish. They willfully engaged in the destruction of nearby habitat for personal gain. I hope that the city fines each with at least the cost of replacing the trees.