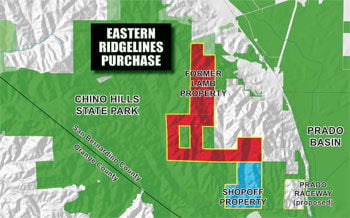 The turquoise colored parcel known as Shopoff will be purchased with state and federal funds to protect the Chino Hills State Park. The salmon colored land shown on the map is the former Lamb property, now called First National Investment Properties that is expected to be purchased next. 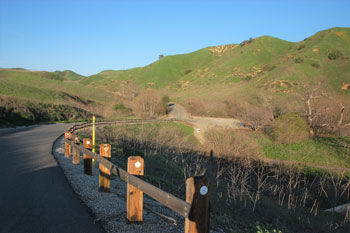 The 14,173-acre Chino Hills State Park will remain an oasis of tranquility with the acquisition of eastern ridgelines to hem in visitors.

The turquoise colored parcel known as Shopoff will be purchased with state and federal funds to protect the Chino Hills State Park. The salmon colored land shown on the map is the former Lamb property, now called First National Investment Properties that is expected to be purchased next.

The 14,173-acre Chino Hills State Park will remain an oasis of tranquility with the acquisition of eastern ridgelines to hem in visitors.

Hills for Everyone has finally received the funding necessary for the state to purchase 400 acres of ridgeline property that will protect the Chino Hills State Park from the sights and sounds of urban life that surrounds it.

The acquisition will occur in two phases with 320 acres being acquired this year and the remaining 80 next year.

Claire Schlotterbeck, executive director of Hills for Everyone, the group that founded the Chino Hills State Park 40 years ago, made the announcement Monday, stating that “it’s been a long time coming.”

On Feb. 26, the Wildlife Conservation Board approved a $1 million grant for the purchase of land in Chino Hills known as the Shopoff property (see map).

Additional funds will be made available from a federal grant.

Ms. Schlotterbeck said the Mountains Recreation Conservation Authority, a sister conservation agency to the California Department of Parks and Recreation, stepped in to take title to the land.

She said the State Parks Department has not been acquiring land for the last ten years.

“We found the funds, but the state has not been willing to take title,” she said.

That property consisted of more than 1,200 acres of high-quality habitat that supports species including the California gnatcatcher, a small bird that lives in coastal sage scrub, he said.

The spokesman said the State Parks Department regularly engages in discussions regarding potential acquisitions and reviews its acquisition list as opportunities become available.

Ms. Schlotterbeck said the State Parks Department has always wanted to purchase the Shopoff land because it is bordered by the Chino Hills State Park on three sides.

“This fills in the donut hole,” she said. “We’re looking forward to when the property actually closes escrow” which she expects to occur in several months.

Hills for Everyone also has its sights on the 1,200-acre property formerly owned by the Lamb family which is adjacent to and north of the Shopoff property (see map).

Negotiations for the land will likely start this year by a group called The Conservation Fund, she said.

Ms. Schlotterbeck said Hills for Everyone is hoping that the State Parks Department will take title to the property.

The two properties would become the eastern ridgelines that have been on the radar for decades, she said.

The process includes a review of the property’s attributes including natural and cultural resources, interpretive opportunities, operational needs, and the benefits to the public of adding the property to the state park system, he said.

Legislative approval may also be required when there are costs associated with the transaction, he added.

Gov. Newsom’s proposed 2020-21 budget includes $65 million for the “Parks for All” initiative to expand access to state parks, open space, and nature and cultural amenities, he said.

Of the $65 million, $24.6 million is being proposed to establish a new state park or parks and acquiring new lands to expand parks, the spokesman said.

Ms. Schlotterbeck said Assemblyman Phillip Chen is carrying a bill (AB 2021) that would require the State Parks Department to help acquire and take title to three properties, the Shopoff land, the former Lamb property, and an 11-acre parcel near the Discovery Center in Brea which the owner wants to donate.

The spokesman said the State Parks Department does not comment on pending legislation.