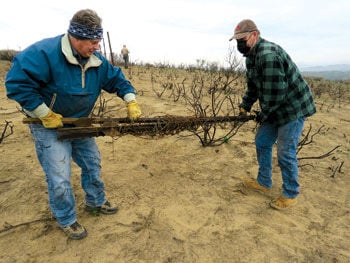 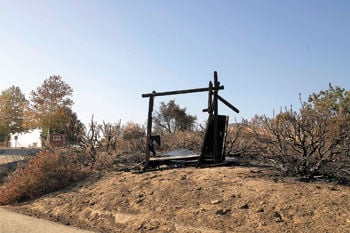 The former campground sign atop a small hill near the Rolling M Ranch at Chino Hills State Park that welcomed visitors to the campground was burned during the Blue Ridge Fire. The sign will be replaced using grant money. A river rock buffer will be placed underneath the new sign.

The former campground sign atop a small hill near the Rolling M Ranch at Chino Hills State Park that welcomed visitors to the campground was burned during the Blue Ridge Fire. The sign will be replaced using grant money. A river rock buffer will be placed underneath the new sign.

The Blue Ridge Fire that consumed more than half the Chino Hills State Park in October 2020 exposed four miles of barbed wire that volunteers are quickly removing before it is covered by vegetation again.

Burned structures such as the entire campground, trail fencing, bridges, the native plant garden and its signs are being rebuilt thanks to grant money from the California State Parks Foundation.

Volunteers describe the restoration events as silver linings that resulted from the fire.

Mary Glaser, a board member with the Chino Hills State Park Interpretive Association, said it is now easy to find the barbed wire that impedes wildlife movement and is dangerous to animals.

On Monday, volunteers removed 3,500 feet of fencing with at least four strands of barbed wire between posts, Ms. Glaser said.

The fencing is left over from the cattle ranching days going back to the late 1940s. This Sunday, Feb. 21, volunteers plan to remove at least 2,000 feet of fencing, some of it on hillsides which is proving challenging, Ms. Glaser said.

She is hoping to have at least two more volunteer days this season.

“It’s really a thrill to see more and more barbed wire removed,” she said. “I saw two deer jump over the fencing. One stumbled after landing but seemed okay. There’s nothing so majestic as seeing wild animals in their natural habitat.”

Ms. Glaser said once the vegetation gets too thick and the rattlesnakes come out in force, the volunteers will have to call it quits for the season.

Because of social distancing requirements and limited supplies, volunteers have to be kept to a certain number, she said.

Just in time to help the Chino Hills State Park, the nonprofit California State Parks Foundation awarded $135,000 in grants to help 15 state parks from its new Wildfire Resiliency and Prevention Fund created in 2020.

Hills for Everyone, the group that founded the State Park, received $10,000 to restore the entrance to the Chino Hills State Park campground, replace the burned-out campground sign, replant native vegetation in the native plant trail that burned between the campground and amphitheater, and repair the fencing along Bane Canyon Road near the Rolling M Ranch and Barn.

The State Park received $8,500 to restore the pedestrian campground bridge that linked the horse camp to the amphitheater and regular campground.

The grant will also be used to purchase Thermogel, a liquid that can be applied prior to a fire to prevent a structure from burning.

Melanie Schlotterbeck, technical director for Hills for Everyone, said the Chino Hills State Park has faced unrelenting destruction by wildfire as developments, encroachment and roads have increased accessibility at the wildland-urban interface.

“Chino Hills State Park has been pummeled repeatedly and the frequency of these large wildfires goes way beyond the natural fire frequency which has a normal burn rate of every 30 to 150 years,” she said.

The habitats that have been set aside to protect forever are being change to non-native grasslands that dry out earlier in the season, ignite easier and spread fire faster, repeating a vicious cycle, Ms. Schlotterbeck said. “All of this is contrary to climate resiliency,” she said.

Ms. Schlotterbeck said Hills for Everyone, the Interpretive Association, and the State Park work closely together to prioritize park needs and support one another’s projects while the park is recovering from the fire.

As for animals surviving the fire, she said there was no actual observation of escaping animals or deceased animals but because they had room to escape to the west and some spots to the north.

“One would hope many survived,” she said.