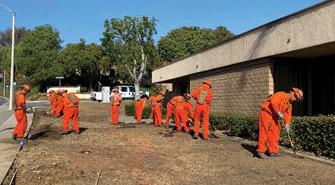 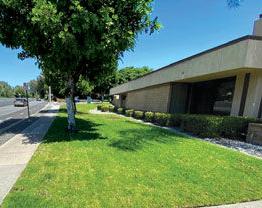 Chino Fire Station 66, same view as  photo above, before the grass and trees were removed for a drought-tolerant landscape substitute.

Chino Fire Station 66, same view as  photo above, before the grass and trees were removed for a drought-tolerant landscape substitute.

Dozens of men wearing orange uniforms worked to remove the grass in front of the fire station on Peyton Drive in Chino Hills (Station 66) last week to prepare for drought-tolerant plantings.

The district will work with a local landscaping vendor to complete the project that includes four drought tolerant plants for every 100 square feet, drip system irrigation, the use of rock and decomposed granite, and rain-catching rock swale.

SoCal WaterSmart is a rebate program offered by MWD.

The Chino Hills station is the second turf replacement project for the fire district, said the chief.

In early March, the district received approval to replace 4,000-square-feet of grass and shrubs with drought-tolerant sustainable landscaping at the fire station on Kimball Avenue in Chino (Station 63), said Chief Atkinson.

“The process involved many components from submissions, drawings, onsite visits, and the actual work,” he said.

The district was approved for a rebate of $12,252 from SoCal WaterSmart and the MWD of Southern California, he said.

The project consisted of removing 4,000-square-feet of grass, four drought-tolerant plants for every 100 square feet, drip system irrigation, the use of bark and decomposed granite, and rain-catching rock swale, he said.

The project was completed on schedule and in budget, he added.

The other fire station with turf is on Butterfield Ranch Road and Sagebrush Street in Chino Hills (Station 62) that has a 12-foot strip of grass, he said.

The chief said the fire department has a partnership with CalFire where Type 1 (minimum security) inmate crews work on projects when they are not fighting fires.

Prado Conservation Camp at 14467 Central Avenue at Eucalyptus Avenue is jointly operated by the California Department of Corrections and Rehabilitation (CDCR) and CAL Fire, and provides inmate fire crews for San Bernardino County.

Prado is one of the more than 40 state prison fire camps where inmates perform firefighting duties during the wildland fire season for credit for early release and minimal pay.

When not working on fire suppression, inmate hand crews provide fire defense improvements, weed abatement, and public projects, according to the CDCR website.

CAL Fire is an emergency response and resource protection department for more than 30 million acres of wildland in California.