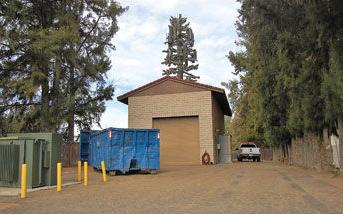 The Eucalyptus Booster Station is behind this enclosure adjacent to Boys Republic west of the old fire station on Eucalyptus Avenue. 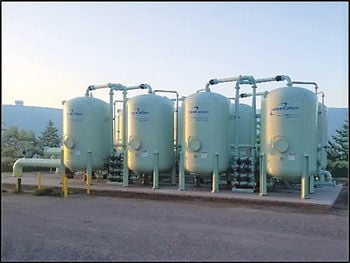 An image of a granulated activated carbon filtration system. A similar facility is proposed in the area of Eucalyptus Booster Station to remove a carcinogenic chemical known as 1,2,3-TCP.

The Eucalyptus Booster Station is behind this enclosure adjacent to Boys Republic west of the old fire station on Eucalyptus Avenue.

An image of a granulated activated carbon filtration system. A similar facility is proposed in the area of Eucalyptus Booster Station to remove a carcinogenic chemical known as 1,2,3-TCP.

It will be two years in December that the city of Chino Hills shut down its wells because of a new contamination level set by the state for the chemical 1,2,3-TCP (TCP) and it could take another three years before a filtration system can be built to treat the chemical and put the wells back in service, according to public works officials.

The city has been paying approximately $1 million a year to purchase water because of the shutdown and it will cost $5 million for land acquisition, design, and construction associated with the filtration system, said officials.

During a presentation to the Chino Hills Public Works Commission Nov. 6, utilities operations manager Mark Wiley said the city would like to build the system near the Eucalyptus Booster Station on Eucalyptus Avenue adjacent to Boys Republic.

The location is just west of the old fire station at the 71 Freeway.

Mr. Wiley said all city wells pump to this booster station and from there, it’s pumped into the distribution system.

He provided a site map with boundaries surrounding the booster station showing the potential location for the system.

“This is our idea of where we’d like to go with it,” he said.

Mr. Wiley said the best available technology for removing TCP from water is the use of granulated activated carbon filtration.

Mr. Bobadilla said the land is expected to be acquired within the next four to six months, design of the facility will take approximately one year, and construction is estimated at 24 months.

The new contamination level for TCP is five parts per trillion set by the state’s Water Resources Control Board. It went into effect in December 2017.

The U.S. Environmental Protection Agency has classified TCP as “likely to be carcinogenic to humans” according to the agency’s fact sheet.

TCP has been shown to cause cancer in animals and is recognized by the State of California as a human carcinogen, according to a fact sheet from the State Water Resources Control Board.

The city has 10 wells, all located in the city of Chino, mostly around Schaefer and Central avenues.

Four wells were found to exceed the new contamination level and were removed from service in 2017. Because the four wells were used to “blend” water with the other wells to reduce contaminants, an additional five wells were shut down at the same time.

Blending is where high-quality water is mixed with lower quality water to a ratio that meets required standards before delivery to customers, according to the city’s water quality report.

The city of Chino installed filtration vessels at its centralized treatment facilities in August 2017.

Mr. Wiley warned the public works commission about two additional chemicals of emerging concern: PFOA and PFOS, used extensively in consumer products designed to be waterproof, stain-resistant, or non-stick, such as Teflon.

He said the good news is that these chemicals can be treated with the same granulated activated carbon filtration system that will treat TCP.

Mr. Bobadilla said that the chemicals PFOA and PFOS have not yet been tested in the city’s wells because the wells are offline. He also said limits on these chemicals have not been established yet.