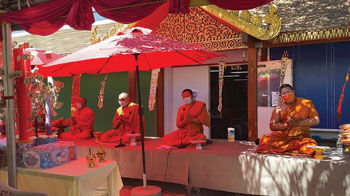 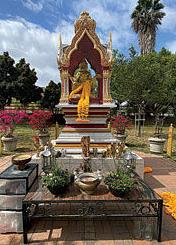 Shrines to Buddha are seen throughout the 7.3-acre grounds with offerings and incense. 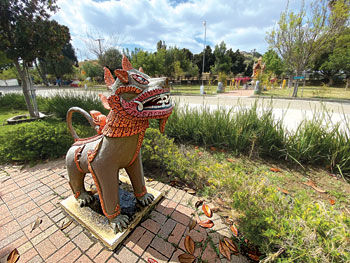 Numerous statues are on the 7.3-acre Buddhist Temple property in Chino Hills with brick pathways, a wide variety of trees, and gardens.

Shrines to Buddha are seen throughout the 7.3-acre grounds with offerings and incense.

Numerous statues are on the 7.3-acre Buddhist Temple property in Chino Hills with brick pathways, a wide variety of trees, and gardens.

Monks in orange robes chanted as they sat on a platform where incense gave off a smoky fragrance to celebrate the “Songkran Festival,” also known as Thai New Year Day.

Songkran is a national holiday in Thailand and comes on April 13 every year and is celebrated through April 15.

Hope for a building

Punctuating the celebration was hope that development plans submitted to the City of Chino Hills for a Buddha Hall will come to fruition.

The planning commission in 2017 approved a 3,100-square-foot marble Buddha Hall, or temple, a 9,025-square-foot monk dormitory, meditation and multipurpose building, classrooms, and a kitchen, followed by the city council’s approval of a zone change and general plan amendment.

The 7.3-acre property was zoned neighborhood commercial and changed to institutional.

The planning commission insisted that the numerous trees throughout the site remain intact to serve as a landscape buffer for the property. Building official Winston Ward said the applicant submitted plans in 2020 and the majority of corrections from the planning and building divisions have been addressed.

One outstanding issue related to the kitchen/restroom building is still being worked out, he said, and the city is awaiting a resubmittal.

“We do not want to be in a position where we have a finished temple without adequate restroom facilities,” Mr. Ward said.

The Buddhist Temple grounds are open to the public seven days a week. Scenic walkways, statues, inspirational sayings and multiple images of Buddha can be seen on the property.

In February, outdoor lunches resumed on Sundays where residents can purchase Thai food with tokens purchased at a booth.

The community is invited between approximately 10:30 a.m. and 3 p.m. every Sunday to purchase home-made dishes. Monks conduct rhythmic chanting.

The property was owned by the Chino Hills Baptist Church from 1987 to 1996, before the church sold to the Buddhists.

Aging modular buildings are used for the Buddha Hall, classrooms, and dormitories.

The Buddhist community has gone through periods of financial hardships since they moved onto the property 25 years ago but always with the dream of having a permanent facility one day.

The project will be undertaken in three phases, with the first phase to include the Buddha Hall. The first phase is estimated to take at least two years to complete.