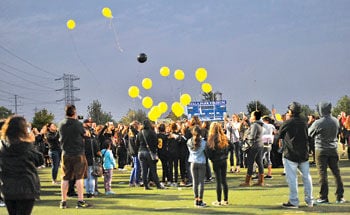 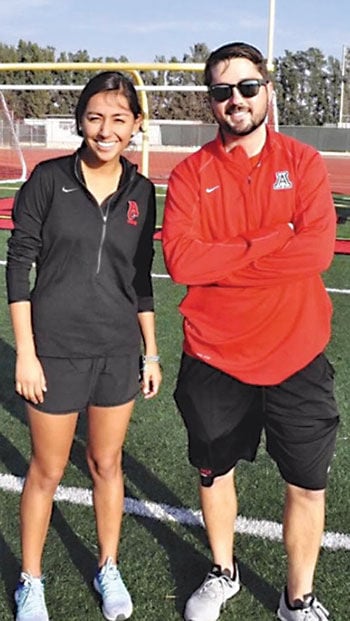 Yellow and black balloons were sent into the twilight sky Wednesday by dozens of young soccer players from Legends FC organization in remembrance of two coaches killed tragically Monday afternoon in a head-on crash with a semi-truck, following a weekend trip to the river in Arizona.

Tears flowed from the eyes of those young players and their parents during the 500-person gathering at the Ayala Park Stadium in Chino to remember and honor 30-year-old Matt Hodges and 20-year-old Gaby Constante, who along with Marissa Garnica, 20, and Jessica Girardo, 21, died in the 3:14 p.m. crash on Highway 177, about 19 miles north of Desert Center near Joshua Tree National Park.

Each team took turns releasing the balloons, many of them attaching notes for their coaches.

Family members of the victims were among those in attendance, receiving hugs and prayers from the soccer players and parents. Almost everyone wore Legends FC clothing.

In attendance was Mr. Hodges’ brother, Josh Hodges, who founded and is director of Legends FC.

“He was my best friend,” Mr. Hodges told the crowd. “Matt and Gaby loved to coach soccer.”

Ms. Garnica and Ms. Girardo were high school teammates of Ms. Constante at Vista Murrieta High School. They graduated in 2014 before going to separate colleges. Ms. Constante played at the University of La Verne, including the 2016-17 season. She played in 13 games that season.

Ayala High School athletic director Warren Reed said the school held a private on-campus vigil at lunch time, which was only open to students and staff.

“I’ve been here at Ayala for 18 years and this has probably been the hardest day,” Mr. Reed said Tuesday morning, the first day back at school after hearing the news of the crash. “Our hearts are breaking for the Hodges and Constante families. These are two young people. It’s tough.”

He said grief counselors were at the school Tuesday for students.

“Our female soccer players are our focus. There were eight seniors that played this year, and all showed up at graduation practice this morning,” Mr. Reed said.

Ayala High School’s graduation was Wednesday afternoon at Citizens Business Bank in Ontario. Mr. Hodges and Ms. Constante were honored at the ceremony.

“They were great coaches,” said the 15-year-old freshman who also played for Coach Hodges and Coach Constante with Legends FC club soccer. “They taught all us everything from life to soccer. They were always in a good mood and gave it their all. I still feel like they are here in a way.”

“Children respond very well to animals. Beachwood is calm and he will let anyone pet him, and hug him, and love him,” Mrs. Cabrera said. “For some of the students, all they need is a good cry and to be soothed. Beachwood just rested his head on their laps and helped them soothe.”

“The players were thankful and grateful,” Mrs. Cabrera said.

California Highway Patrol investigators said a Toyota Corolla, driven by Mr. Hodges, may have been trying to pass a slower moving car on Highway 177 when it collided head on into the big rig, driven by 55-year-old Phillip Barnnett of Oklahoma. He was not hurt.

The three women were pronounced dead at the scene, and Mr. Hodges was taken to Desert Regional Medical Center in Palm Springs where he died at 5:51 p.m., according to the Riverside County Coroner’s office.

“It is with great sorrow and sadness that we are writing this message to you all.  In the late afternoon of May 29th the Legends Family was dealt life altering news when two of our coaches, Gabby Constante and Matt Hodges, were involved in a major car accident that resulted in their passing later that evening.  The entire Legends staff is in mourning,” the post said.

It will help provide financial support for fees, equipment and other soccer-related needs for players.

As of Friday morning, the site has raised $8,240 of a goal of $10,000. The site can be viewed at https://www.gofundme.com/the-gaby-constante-scholorship.

Legends FC is also hosting a soccer tournament this weekend at several locations in Chino and Chino Hills. More than 200 teams will compete in several divisions. A moment of silence will take place before each game, organizers said.