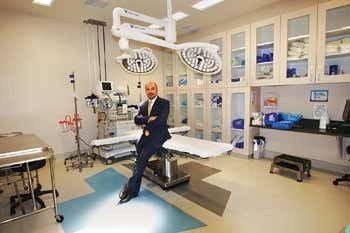 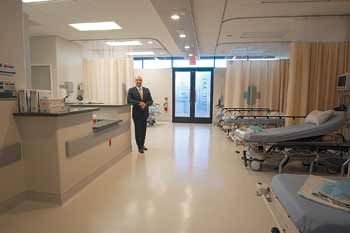 A six-bed recovery room is decorated in tan and blue reflecting the Truecare colors. Each bay contains lights that can be switched to different colors to soothe residents.

A six-bed recovery room is decorated in tan and blue reflecting the Truecare colors. Each bay contains lights that can be switched to different colors to soothe residents.

A Chino Hills resident has opened the first multi-specialty ambulatory surgery center in the city.

Babak Farzaneh, M.D., a cosmetic surgeon who formerly practiced in Chino, held a grand opening for Truecare Surgery Center in June at The Commons shopping center, at the southeast corner of Chino Hills Parkway and Ramona Avenue.

The facility includes three operating rooms, a six-bed recovery room, and a large waiting room with a fireplace.

In addition to the cosmetic surgeries performed by Dr. Farzaneh, patients will be able to undergo general surgery, orthopedic, podiatric, gynecologic, ophthalmologic, bariatric and spine.

One operating room is dedicated to gastroenterology for procedures such as colonoscopy and includes a pass-through window for scopes to ensure infection control.

To increase the sterility of all procedures, the center is equipped with a health-care grade air purification system.

“Initially my hope was to have a surgery facility for my own patients, until I saw there was a need in the community for a surgery center,” he said. “We just need doctors to take notice and make us an addition to their practice.”

Truecare is certified by the Joint Commission for the Ambulatory Health Care Accreditation Program, as well as by Medicare, and is negotiating contracts with insurance carriers and independent physician associations (IPAs).

Dr. Farzaneh is also working with the Inland Empire Health Plan for those with Medi-Cal.

Chino Hills resident Anshul Varshney, M.D., is getting on board.

The ophthalmologist, who practices in Chino, said his patients have been asking for a surgery center closer to home for cataract, glaucoma and other eye procedures.

“I’d like to use Truecare because it’s centrally located and very spacious,” he said. “And Dr. Farzaneh has a reputation for excellent care.”

Dr. Farzaneh was named top doctor for 2014 by Inland Empire Magazine. He also received the Patients Choice Award several times and the Most Compassionate Doctor award, based on patient feedback.

Dr. Farzaneh makes house calls. He visits each patient at home after surgery and provides them with his cell phone number.

His anesthesiologist remains at the side of patients until they are discharged.