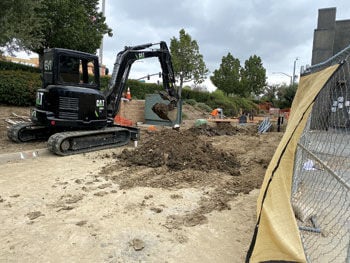 Crews are in the underground phase of construction for the Tesla supercharger station. 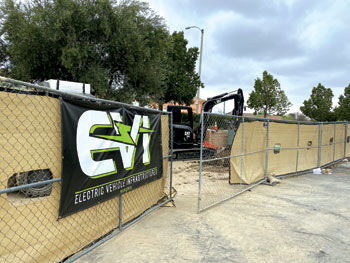 A construction fence is set up in the parking lot between P.F. Chang’s and Wood Ranch Barbecue at The Shoppes.

Crews are in the underground phase of construction for the Tesla supercharger station.

A construction fence is set up in the parking lot between P.F. Chang’s and Wood Ranch Barbecue at The Shoppes.

Workers are trenching and laying out conduit for a supercharger electric vehicle charging station in the parking lot between Wood Ranch Barbecue Restaurant and P.F. Chang’s at The Shoppes at Chino Hills.

The parking stalls will no longer be available for restaurant-goers looking for places to park in the already crowded lot.

The equipment cabinets will be located within the landscaped buffer area between P.F. Chang’s and Grand Avenue.

The project should take about four months to complete, with operations expected to begin by mid-June or early July, Mr. Ward said.

The Tesla supercharger allows Tesla owners to charge their cars in under an hour.

Destination chargers have a slower charging speed than the superchargers.

Mr. Ward has said the system is proprietary and can only be used by Tesla vehicles.

Investing and finance websites describe Tesla as focused on people in their 20s to young 40s who fall into three categories: eco-friendly, tech-savvy, and entry-level luxury buyers.