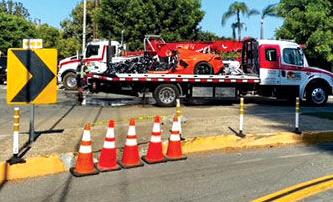 A heavily-damaged Corvette is removed from the crash site where two people were killed and one injured early Wednesday in Chino. 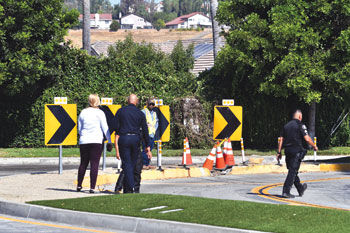 Chino police look over the area where the Corvette hit the center median.

A heavily-damaged Corvette is removed from the crash site where two people were killed and one injured early Wednesday in Chino.

Chino police look over the area where the Corvette hit the center median.

Excessive speed was a factor in a crash that killed a 27-year-old man and 21-year-old woman and severely injured a 23-year-old woman when the convertible Corvette they were in went airborne into a backyard pool early Wednesday morning in Chino.

Flowers and candles have been placed at the spot where the 2:19 a.m. crash took place on East End and Schaefer avenues, just outside the ivy fence to the backyard on Alicia Way where the orange Corvette came to rest upside down in the pool of homeowner Art Gurrerro.

The three occupants of the car were ejected. The 21-year-old woman died at the scene, the 27-year-old later died at a hospital and the 23-year-old woman is hospitalized with severe injuries, according to Chino Police Sgt. Jesus Jacquez.

The car struck a concrete median where it curves from  westbound Schaefer to northbound East End, went airborne over 10-foot tall bushes, and landed inside the pool, Sgt. Jacquez said.

The heavily damaged car was removed seven hours later. It was first reported that the 21-year-old woman was behind the wheel, but Sgt. Jacquez said Thursday afternoon that investigators determined the 27-year-old man was driving the Corvette, which only seats two people.

The identities of the two deceased victims have not yet been released by the San Bernardino County Coroner’s office, Sgt. Jacquez said Thursday.

Wonder how they afford this car??? Fraudulent PPP loan perhaps?

Wow. What a chicken 💩you are to make such a comment with a fake profile. Did you feel like a big strong, funny, person hiding behind your keyboard? I hope you feel validated in that dark cave you are typing in. People like you are always the punchline.