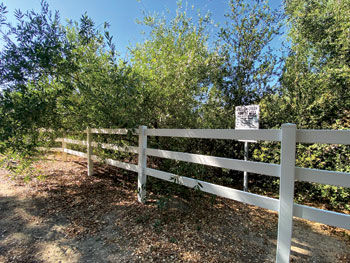 A section of the English Creek Habitat is located on the southern edge of the McCoy Center grounds. 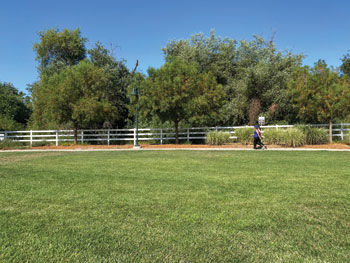 Walkers on the pathway at the Chino Hills Community Center grounds pass the English Creek Habitat located behind the trail fencing.

A section of the English Creek Habitat is located on the southern edge of the McCoy Center grounds.

Walkers on the pathway at the Chino Hills Community Center grounds pass the English Creek Habitat located behind the trail fencing.

A $197,375 contract was recently award by the Chino Hills City Council to Nature Images, Inc. to provide native landscape and maintenance for the English Creek Habitat that was created to offset the impacts of the Peyton Drive widening project.

When the city widened Peyton from Eucalyptus Avenue to Grand Avenue and built the stormwater facility at Peyton and Eucalyptus, it was required by federal and state regulatory agencies to establish the “English Channel Mitigation Project.”

The project included the creation of 1.45 acres of riparian habitat along the English Channel and the enhancement of 6.91 acres for a total of 8.36 acres.

Some of the habitat can be seen along the trail fencing on the western edge of the Chino Hills Community Center that meanders into the southern portion of the McCoy Center grounds.

When the city finished the nature area in 2018, it then entered a five-year maintenance phase of which it is now in the third phase.

That amount includes an estimated $700,000 for long-term conservation easement and endowment requirements, he said.

A conservation agency will receive the endowment funds to manage the habitat in perpetuity, Mr. Bobadilla said.

That contract, which is expected to cost less than $700,000, will be presented to the city council at a future meeting, he said.

Mr. Bobadilla said there are approximately 47 species of birds and animals that have been observed in the habitat, including the least Bell’s vireo which is a protected songbird, Monarch butterflies, sharp-shinned hawks, and the American Yellow Warbler.

Several dried-out fan palm trees are located throughout the habitat. Mr. Bobadilla said the regulatory agencies consider the palms as invasive non-native trees that do not meet the restoration plan permit requirements.

The city is obligated to treat the fan palms to eliminate them, he said. The palms have been treated and are slated for removal.