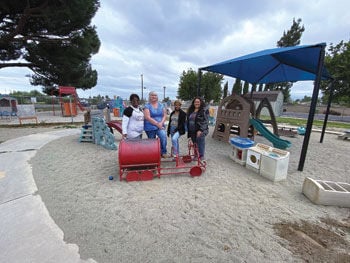 The preschool playground at Christ Lutheran Church will undergo a makeover while the school is temporarly closed, including replacing the sand with mulch material, removing the grass, repainting, and replacing some of the playground equipment. Shown (from left) are Annie Beld, teacher; Stacey Strasser, preschool director; Angela Winton, teacher; and Anelle Veiga, teacher. 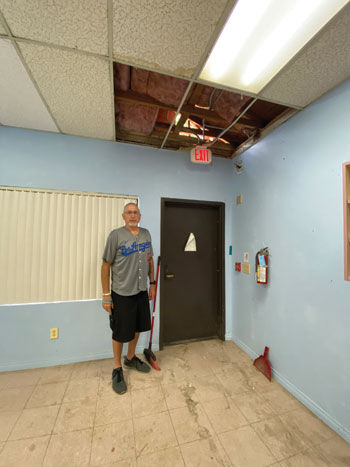 Pastor Roy Robbins stands in the preschool’s “blue room” where a fire caused damage. Preschool and church staff have been taking inventory of items that need to be replaced.

The preschool playground at Christ Lutheran Church will undergo a makeover while the school is temporarly closed, including replacing the sand with mulch material, removing the grass, repainting, and replacing some of the playground equipment. Shown (from left) are Annie Beld, teacher; Stacey Strasser, preschool director; Angela Winton, teacher; and Anelle Veiga, teacher.

Pastor Roy Robbins stands in the preschool’s “blue room” where a fire caused damage. Preschool and church staff have been taking inventory of items that need to be replaced.

Children and their parents have been without a preschool since April 11 when a small fire damaged two classrooms at Christ Lutheran  Church Preschool on Francis Avenue in Chino.

A “restricted use” yellow tag placed in the preschool office window by the City of Chino prohibits all visitors until the wiring to the fire alarm system is repaired or replaced.

Pastor Roy Robbins said the fire occurred at approximately 8 p.m., shortly after a power outage in the neighborhood.

The Chino Valley Fire District responded to a call that equipment on a power pole on Vernon Avenue melted and dropped onto a lawn, said fire district spokeswoman Massiel Ladron De Guevara.

She said firefighters responded to the call before being redirected to the church.

Pastor Robbins said after the firefighters responded to a small fire on the lawn at Vernon, a church member saw sparks coming from the preschool.

“If those sparks were not seen by Erika, the preschool would have probably burned to the ground,” he said.

Ms. Ladron De Guevara said the power outage and fire occurred simultaneously, but it is undetermined if they were related.

The pastor said the fire was one incident in a series of back-to-back unfortunate events, including a trespasser who charged at him  on the church grounds and anti-Christian graffiti on the church sign and campus.

He said the church held a 24-hour prayer vigil to get rid of the negativity.

Pastor Robbins said although damage to the church was minor, remediation has been underway since April 11 because of smoke and water damage.

Air scrubbers have been brought in by the remediation contractor to remove contaminants and particulates.

Portions of the roof that were cut by firefighters for ventilation must be replaced and duct work may be needed, he said.

Preschool director Stacey Strasser said, “I believe God must have a plan for all of this. While the preschool is closed, we will be able to update our playground.”

Ms. Strasser said the makeover will provide the church with a better curb appeal.

She said preschool had just begun to increase its attendance numbers after COVID, when the fire occurred.

Teacher Anelle Veiga of Chino said she will wait until the preschool reopens to resume her job, and in the meantime, spend time at home with her son.

“The playground has been looking dilapidated for awhile but it hasn’t been on our list to upgrade because the children were here,” she said.

The church’s insurance company will take care of the fire damage and the church will raise money for the playground, she said.

Ms. Pierson said playground equipment is very expensive but the church will do the best it can.

“The insurance contractors are telling us the recovery work will be done in four months, but I’m going to hold onto six weeks,” she said.

Most customers were restored by approximately 9:57 p.m. with the last remaining customer restored at 4:45 a.m. April 12, she said.

Christ Lutheran was built on Francis Avenue in 1966.

The church was then known as St. Stephen Lutheran Church until the name was changed to Christ Lutheran in 1974.

It was established by the American Lutheran Church.

While the building was  under construction, the congregation met at E.J. Marshall Elementary School from October 1965 until the first phase of the church was completed in 1966, according to Champion archives.

The church has started a Go Fund Me account for preschool donations. Visit gofundme.com and search Christ Lutheran Church and Preschool.