Chino Hills residents gather at the Vellano Park tennis court on July 24 after finding out their favorite place to play tennis was closing. 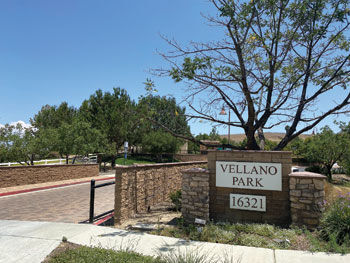 Aviano Lane, the road to Vellano Park, can be accessed from Woodview Road in the Vellano Country Club development. The park’s out-of-the way location offers a sense of seclusion. 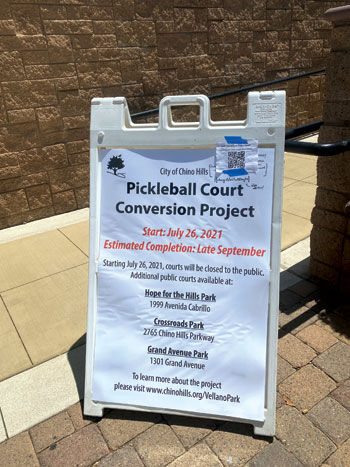 Residents who play tennis at Vellano Park came across this sign last week. Somebody taped a QR code   at the top right that takes residents to a petition via their smartphone to “Save the Vellano Tennis Court.”

Chino Hills residents gather at the Vellano Park tennis court on July 24 after finding out their favorite place to play tennis was closing.

Aviano Lane, the road to Vellano Park, can be accessed from Woodview Road in the Vellano Country Club development. The park’s out-of-the way location offers a sense of seclusion.

Residents who play tennis at Vellano Park came across this sign last week. Somebody taped a QR code   at the top right that takes residents to a petition via their smartphone to “Save the Vellano Tennis Court.”

Signs with the words “pickleball court conversion project” jarred several Chino Hills residents who thought they were going to play a game of tennis last week and instead found their favorite court at Vellano Park closed.

The City of Chino Hills closed the court on Monday so that construction can begin on four pickleball courts at a cost of $100,000, including lighting that will be installed at a later time.

A group of about 15 residents who use the Vellano tennis court regularly but do not live in the Vellano development gathered at the court last weekend.

They started an on-line petition through change.org that had garnered more than 600 signatures as of Thursday.

They spent this past week contacting city councilmembers, city staff, posting on social media, and spreading the word to the tennis community.

Krystin DuCharme of Chino Hills said the tennis court has been the “go-to” place for tennis since before the pandemic and has since become a second home  as the pandemic continues.

“What might have once been an underused park before COVID has since changed,” she said. “We are just asking for officials to revisit their decision and adjust to the times as well.”

Chino Hills resident and licensed PGA Coach Andrew Kramer said he has been playing at the court a few times a week for the past couple of years and noticed that many others do too. “This is one of the nicest tennis courts around town,” he said. “Why take that away from people?”

Julio Gutierrez of Chino Hills, who has helped lead the effort and spoken with city officials, said the city has completely turned its back on the tennis community.

“Being unheard, neglected, and blindsided by your own city is extremely demoralizing,” he said. “I feel like my world has been turned upside down. I thought these were the people that we should be trusting?”

Mayor Brian Johsz said the city prides itself in listening to the wants and needs of residents.

“That’s why for nearly four years, there has been discussions about both tennis and pickleball,” he said. “Public input was sought and received multiple times.”

Mayor Johsz said pickleball has been requested by many residents and it was determined that Vellano was the least used park for tennis.

Mr. Johsz said there will be discussions in the near future about the addition of tennis courts or other amenities at other city parks.

“We would encourage residents to take an active role and make their voices known throughout the process,” he said.

Chino Hills resident Mike Orduno, who has led the pickleball effort for the past four years, said the city taped lines on the tennis court at Vellano to accommodate pickleball so there should not have been a big surprise.

He said unlike tennis players who have alternative courts in the city, pickleball players are forced to play in Diamond Bar, Claremont or Tustin.

According to the fiscal year 2021-22 capital improvement budget, the project description for the Vellano pickleball courts consists of resurfacing and restriping the court, replacing the existing windscreen, repairing the fence, and removing the inground tennis net poles.

It also includes installing six to eight inground poles and nets, installing a 3-foot-high fence to separate each pickleball court, installing benches, and installing lights at a later date.

Ms. DuCharme said the city should have posted signs on all city-owned tennis courts seeking input on the project before the final decision was made.

“The city didn’t reach out to anyone that actually plays on these courts on a regular basis—the tennis community,“ she said. “The only signs notifying us was when it was too late to speak up.”

The 3.5-acre Vellano Park is located on Aviano Lane on the south side of Woodview Road in the Vellano Country Club Development, but it is a city-owned neighborhood park with a basketball court and other facilities. From the park, wide-open views of the valley can be enjoyed.

The tennis court is nestled inside Vellano Park which is considered by the city to be one of the most underused parks for tennis in Chino Hills.

A few residents four years ago began speaking on behalf of the pickleball community in an effort to bring permanent courts to the city. In response, the city taped the roller hock rink at Grand Avenue Park and later the tennis court at Vellano.

Torrey Pines Park, south of Los Serranos Country Club Drive, was considered in 2019 but the price tag rose to $850,000 and was placed on hold when the pandemic hit.