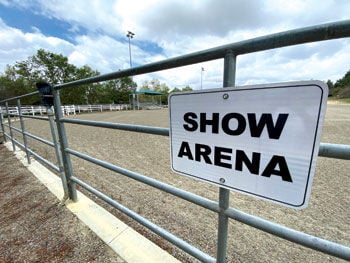 The show arena at McCoy Equestrian Center has been empty not only because of COVID but because of changes in the horse industry that caused the city to “hit a dead spot” when it came to attracting shows, according to city officials. 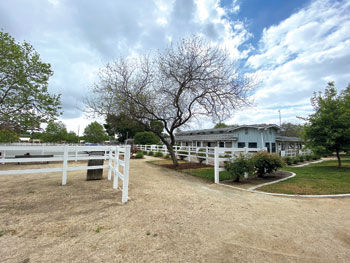 The city spends hundreds of thousands of dollars on a yearly basis to keep McCoy “pristine” as one of the crown jewels in Chino Hills, according to community services director Jonathan Marshall.

The show arena at McCoy Equestrian Center has been empty not only because of COVID but because of changes in the horse industry that caused the city to “hit a dead spot” when it came to attracting shows, according to city officials.

The city spends hundreds of thousands of dollars on a yearly basis to keep McCoy “pristine” as one of the crown jewels in Chino Hills, according to community services director Jonathan Marshall.

After a long COVID pause, the City of Chino Hills is getting back in the saddle to conduct a neighbor-to-neighbor outreach campaign to build up McCoy Equestrian Center on Peyton Drive to its full potential.

The city will begin with the equestrian community on English Road and English Place and invite residents on a one-on-one basis to walk the grounds and arenas with staff members to provide expert opinions.

Community services supervisor Melissa Armit presented a four-phased approach to the Chino Hills Parks and Recreation Commission on Wednesday which has been attempting to boost McCoy activities for the past two years.

“It’s time to re-engage with the equestrian community now that programs are coming back and facilities are reopening,” Mrs. Armit said.

She said the city had been working on a plan including surveying nine cities with equestrian centers regarding facilities, pricing, and venues when the COVID pandemic hit.

A scheduled meeting had to be cancelled and McCoy-related activities stopped.

The second phase includes identifying and reaching out to other parties interested in McCoy’s.

“My number one question to those on English Road is what contacts do you have to help us bring people to McCoy,” said community services director Jonathan Marshall. “I’m very eager to see those names. We have well-connected people on English Road.”

The third phase includes an in-person community meeting and the fourth phase is returning to the Parks and Recreation Commission for discussion before presenting the plan to the Chino Hills City Council.

Suzi Vlietstra, one of the most engaged equestrian members in the community who has organized several events at McCoy’s to keep the equestrian heritage  alive, said she was happy that the Parks and Recreation Commission and city staff voiced strong support for McCoy’s equestrian future.

She has coordinated an “open horse” event at McCoy’s featuring horses   and equestrian-themed crafts, sponsored professional horse trainer Stacy Westfall as a guest speaker at McCoy’s, and opens her ranch every summer for a community ice cream social and horse-themed movie to remind residents of the city’s equestrian heritage.

She has also organized rides and events associated with the Chino Hills Horsemen’s Association she established several years ago.

Ms. Vliestra, who owns and operates Rancho de Felicidad on English Road, suggested that a Chino Hills Equestrian Committee be formed right away to bring equestrian experience at the beginning of planning since the city doesn’t have a budget to hire someone to do this work.

“A strong committee could bring equestrians and the city together to effectively revitalize McCoy’s and to proactively work on other horse community issues too,” Ms. Vlietstra said.

Councilman Ray Marquez in 2019 raised concerns that McCoy was not being used to its full potential and asked that the matter be taken to the Parks and Recreation Commission.

Jana Dala, the former McCoy coordinator and equestrian expert who was asked to address the commission in February of that year, said equestrian trends have changed and the city must reach out to the right groups to attract horse shows.

Many of the groups that hosted horse shows at McCoy are no longer in existence, she told the commission.

City-sponsored horse shows were discontinued in 2016 when Ms. Dale transferred to another department.

During this time period, McCoy’s was becoming a popular wedding and reception location and numerous weekends were booked.

Mr. Marshall said the city hopes to bring a multitude of activities to McCoy, and not just equestrian uses but other venues, such as dog shows that he said have become popular in arena settings.

“I have no less enthusiasm today then when we first took over McCoy’s,” he said. “We don’t build facilities to have them sit dormant.”

Commissioner Greg Higgins said he is very happy the city will resume the process that began in 2019.

“I sat on the McCoy Equestrian Community for a number of years,” he said. “This facility is very near and dear to my heart. I’m looking forward to community input to make it better.”