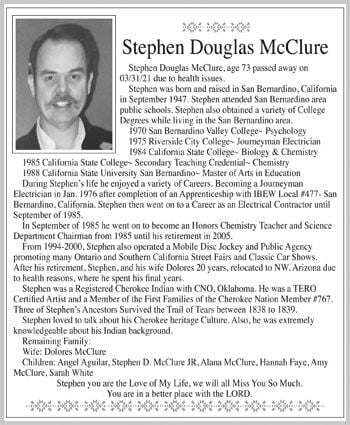 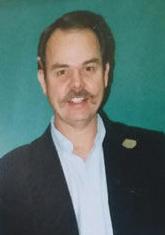 During Stephen’s life he enjoyed a variety of Careers. Becoming a Journeyman Electrician in Jan. 1976 after completion of an Apprenticeship with IBEW Local #477- San Bernardino, California. Stephen then went on to a Career as an Electrical Contractor until September of 1985.

In September of 1985 he went on to become an Honors Chemistry Teacher and Science Department Chairman from 1985 until his retirement in 2005.

From 1994-2000, Stephen also operated a Mobile Disc Jockey and Public Agency promoting many Ontario and Southern California Street Fairs and Classic Car Shows. After his retirement, Stephen, and his wife Dolores 20 years, relocated to NW, Arizona due to health reasons, where he spent his final years.

Stephen was a Registered Cherokee Indian with CNO, Oklahoma. He was a TERO Certified Artist and a Member of the First Families of the Cherokee Nation Member #767. Three of Stephen’s Ancestors Survived the Trail of Tears between 1838 to 1839.

Stephen loved to talk about his Cherokee heritage Culture. Also, he was extremely knowledgeable about his Indian background.

Stephen you are the Love of My Life, we will all Miss You So Much.

You are in a better place with the LORD.