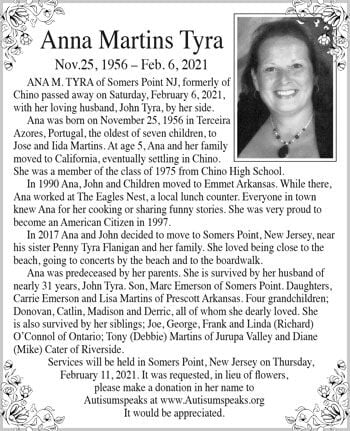 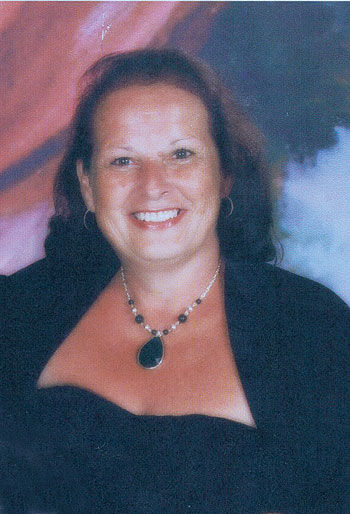 ANA M. TYRA of Somers Point NJ, formerly of Chino passed away on Saturday, February 6, 2021, with her loving husband, John Tyra, by her side.

Ana was born on November 25, 1956 in Terceira Azores, Portugal, the oldest of seven children, to Jose and Iida Martins. At age 5, Ana and her family moved to California, eventually settling in Chino. She was a member of the class of 1975 from Chino High School.

In 1990 Ana, John and Children moved to Emmet Arkansas. While there, Ana worked at The Eagles Nest, a local lunch counter. Everyone in town knew Ana for her cooking or sharing funny stories. She was very proud to become an American Citizen in 1997.

In 2017 Ana and John decided to move to Somers Point, New Jersey, near his sister Penny Tyra Flanigan and her family. She loved being close to the beach, going to concerts by the beach and to the boardwalk.

Ana was predeceased by her parents. She is survived by her husband of nearly 31 years, John Tyra. Son, Marc Emerson of Somers Point. Daughters, Carrie Emerson and Lisa Martins of Prescott Arkansas. Four grandchildren; Donovan, Catlin, Madison and Derric, all of whom she dearly loved. She is also survived by her siblings; Joe, George, Frank and Linda (Richard) O’Connol of Ontario; Tony (Debbie) Martins of Jurupa Valley and Diane (Mike) Cater of Riverside.

Services will be held in Somers Point, New Jersey on Thursday, February 11, 2021. It was requested, in lieu of flowers, please make a donation in her name to Autisumspeaks at www.Autisumspeaks.org It would be appreciated.