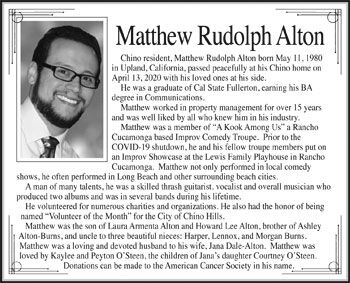 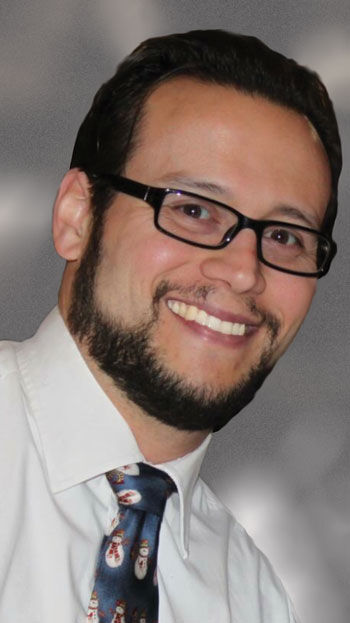 Chino resident, Matthew Rudolph Alton born May 11, 1980 in Upland, California, passed peacefully at his Chino home on April 13, 2020 with his loved ones at his side.

He was a graduate of Cal State Fullerton, earning his BA degree in Communications.

Matthew worked in property management for over 15 years and was well liked by all who knew him in his industry.

Matthew was a member of “A Kook Among Us” a Rancho Cucamonga based Improv Comedy Troupe.  Prior to the COVID-19 shutdown, he and his fellow troupe members put on an Improv Showcase at the Lewis Family Playhouse in Rancho Cucamonga.  Matthew not only performed in local comedy shows, he often performed in Long Beach and other surrounding beach cities.

A man of many talents, he was a skilled thrash guitarist. vocalist and overall musician who produced two albums and was in several bands during his lifetime.

He volunteered for numerous charities and organizations. He also had the honor of being

named “Volunteer of the Month” for the City of Chino Hills.

Matthew was the son of Laura Armenta Alton and Howard Lee Alton, brother of Ashley Alton-Burns, and uncle to three beautiful nieces: Harper, Lennox, and Morgan Burns.  Matthew was a loving and devoted husband to his wife, Jana Dale-Alton.  Matthew was loved by Kaylee and Peyton O’Steen, the children of Jana’s daughter Courtney O’Steen.

Donations can be made to the American Cancer Society in his name.