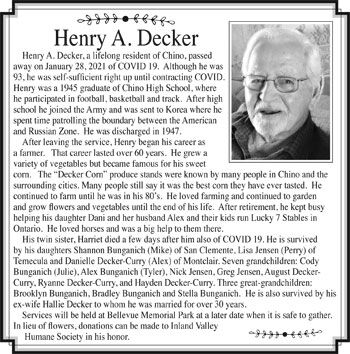 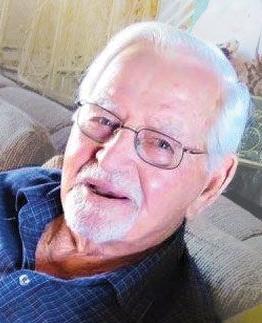 Henry A. Decker, a lifelong resident of Chino, passed away on January 28, 2021 of COVID 19.  Although he was 93, he was self-sufficient right up until contracting COVID.  Henry was a 1945 graduate of Chino High School, where he participated in football, basketball and track.  After high school he joined the Army and was sent to Korea where he spent time patrolling the boundary between the American and Russian Zone.  He was discharged in 1947.

After leaving the service, Henry began his career as a farmer.   That career lasted over 60 years.  He grew a variety of vegetables but became famous for his sweet corn.   The “Decker Corn” produce stands were known by many people in Chino and the surrounding cities. Many people still say it was the best corn they have ever tasted.  He continued to farm until he was in his 80’s.  He loved farming and continued to garden and grow flowers and vegetables until the end of his life.  After retirement, he kept busy helping his daughter Dani and her husband Alex and their kids run Lucky 7 Stables in Ontario.  He loved horses and was a big help to them there.

Services will be held at Bellevue memorial Park at a later date when it is safe to gather.  In lieu of flowers, donations can be made to Inland Valley Humane Society in his honor.