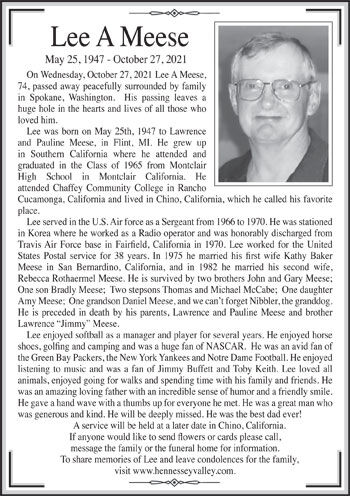 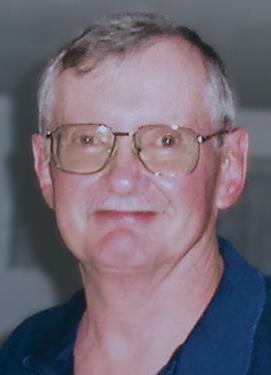 On Wednesday, October 27, 2021 Lee A Meese, 74, passed away peacefully surrounded by family in Spokane, Washington.  His passing leaves a huge hole in the hearts and lives of all those who loved him.

Lee was born on May 25th, 1947 to Lawrence and Pauline Meese, in Flint, MI. He grew up in Southern California where he attended and graduated in the Class of 1965 from Montclair High School in Montclair California. He attended Chaffey Community College in Rancho Cucamonga, California and lived in Chino, California, which he called his favorite place.

Lee served in the U.S. Air force as a Sergeant from 1966 to 1970. He was stationed in Korea where he worked as a Radio operator and was honorably discharged from Travis Air Force base in Fairfield, California in 1970. Lee worked for the United States Postal service for 38 years. In 1975 he married his first wife Kathy Baker Meese in San Bernardino, California, and in 1982 he married his second wife, Rebecca Rothaermel Meese. He is survived by two brothers John and Gary Meese;  One son Bradly Meese;  Two stepsons Thomas and Michael McCabe;  One daughter Amy Meese;  One grandson Daniel Meese, and we can’t forget Nibbler, the granddog. He is preceded in death by his parents, Lawrence and Pauline Meese and brother Lawrence “Jimmy” Meese.

Lee enjoyed softball as a manager and player for several years. He enjoyed horse shoes, golfing and camping and was a huge fan of NASCAR.  He was an avid fan of the Green Bay Packers, the New York Yankees and Notre Dame Football. He enjoyed listening to music and was a fan of Jimmy Buffett and Toby Keith. Lee loved all animals, enjoyed going for walks and spending time with his family and friends. He was an amazing loving father with an incredible sense of humor and a friendly smile. He gave a hand wave with a thumbs up for everyone he met. He was a great man who was generous and kind. He will be deeply missed. He was the best dad ever!

A service will be held at a later date in Chino, California. If anyone would like to send flowers or cards please call, message the family or the funeral home for information.

To share memories of Lee and leave condolences for the family, visit www.hennesseyvalley.com.