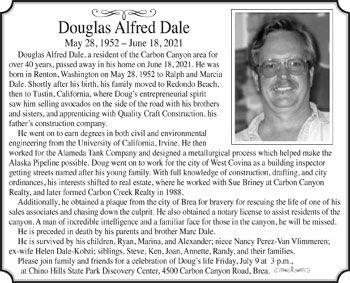 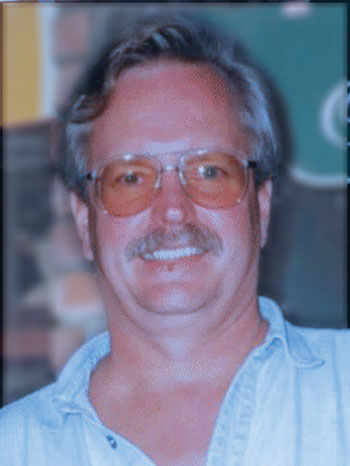 Douglas Alfred Dale, a resident of the Carbon Canyon area for over 40 years, passed away in his home on June 18, 2021. He was born in Renton, Washington on May 28, 1952 to Ralph and Marcia Dale. Shortly after his birth, his family moved to Redondo Beach, then to Tustin, California, where Doug’s entrepreneurial spirit saw him selling avocados on the side of the road with his brothers and sisters, and apprenticing with Quality Craft Construction, his father’s construction company.

He went on to earn degrees in both civil and environmental engineering from the University of California, Irvine. He then worked for the Alameda Tank Company and designed a metallurgical process which helped make the Alaska Pipeline possible. Doug went on to work for the city of West Covina as a building inspector getting streets named after his young family. With full knowledge of construction, drafting, and city ordinances, his interests shifted to real estate, where he worked with Sue Briney at Carbon Canyon Realty, and later formed Carbon Creek Realty in 1988.

Additionally, he obtained a plaque from the city of Brea for bravery for rescuing the life of one of his sales associates and chasing down the culprit. He also obtained a notary license to assist residents of the canyon. A man of incredible intelligence and a familiar face for those in the canyon, he will be missed.

He is preceded in death by his parents and brother Marc Dale.