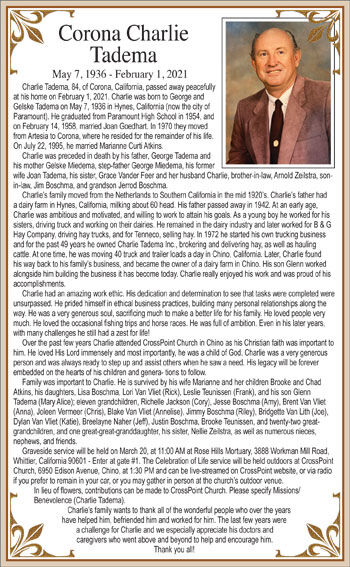 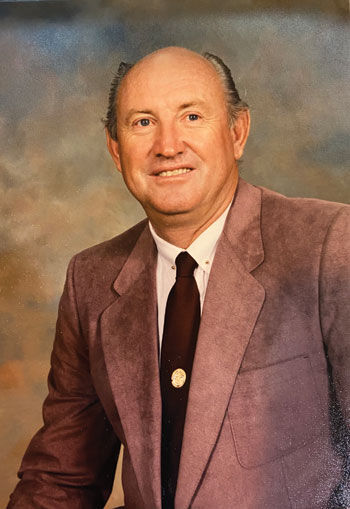 Charlie Tadema, 84, of Corona, California, passed away peacefully at his home on February 1, 2021. Charlie was born to George and Gelske Tadema on May 7, 1936 in Hynes, California (now the city of Paramount). He graduated from Paramount High School in 1954, and on February 14, 1958, married Joan Goedhart. In 1970 they moved from Artesia to Corona, where he resided for the remainder of his life. On July 22, 1995, he married Marianne Curti Atkins.

Charlie’s family moved from the Netherlands to Southern California in the mid 1920’s. Charlie’s father had a dairy farm in Hynes, California, milking about 60 head. His father passed away in 1942. At an early age, Charlie was ambitious and motivated, and willing to work to attain his goals. As a young boy he worked for his sisters, driving truck and working on their dairies. He remained in the dairy industry and later worked for B & G Hay Company, driving hay trucks, and for Tenneco, selling hay. In 1972 he started his own trucking business and for the past 49 years he owned Charlie Tadema Inc., brokering and delivering hay, as well as hauling cattle. At one time, he was moving 40 truck and trailer loads a day in Chino, California. Later, Charlie found his way back to his family’s business, and became the owner of a dairy farm in Chino. His son Glenn worked alongside him building the business it has become today. Charlie really enjoyed his work and was proud of his accomplishments.

Charlie had an amazing work ethic. His dedication and determination to see that tasks were completed were unsurpassed. He prided himself in ethical business practices, building many personal relationships along the way. He was a very generous soul, sacrificing much to make a better life for his family. He loved people very much. He loved the occasional fishing trips and horse races. He was full of ambition. Even in his later years, with many challenges he still had a zest for life!

Over the past few years Charlie attended CrossPoint Church in Chino as his Christian faith was important to him. He loved His Lord immensely and most importantly, he was a child of God. Charlie was a very generous person and was always ready to step up and assist others when he saw a need. His legacy will be forever embedded on the hearts of his children and genera- tions to follow.

Graveside service will be held on March 20, at 11:00 AM at Rose Hills Mortuary, 3888 Workman Mill Road, Whittier, California 90601 - Enter at gate #1. The Celebration of Life service will be held outdoors at CrossPoint Church, 6950 Edison Avenue, Chino, at 1:30 PM and can be live-streamed on CrossPoint website, or via radio if you prefer to remain in your car, or you may gather in person at the church’s outdoor venue.

In lieu of flowers, contributions can be made to CrossPoint Church. Please specify Missions/ Benevolence (Charlie Tadema).

Charlie’s family wants to thank all of the wonderful people who over the years have helped him, befriended him and worked for him. The last few years were a challenge for Charlie and we especially appreciate his doctors and caregivers who went above and beyond to help and encourage him. Thank you all!