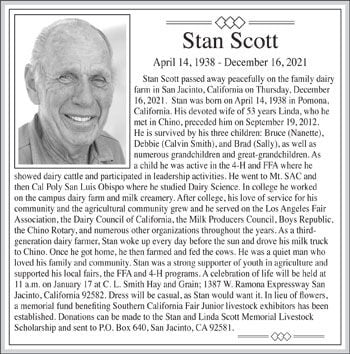 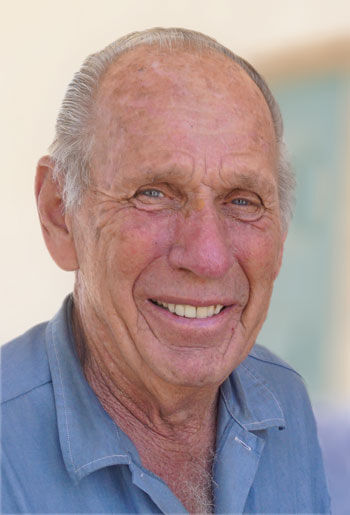 Stan Scott passed away peacefully on the family dairy farm in San Jacinto, California on Thursday, December 16, 2021.  Stan was born on April 14, 1938 in Pomona, California. His devoted wife of 53 years Linda, who he met in Chino, preceded him on September 19, 2012. He is survived by his three children: Bruce (Nanette), Debbie (Calvin Smith), and Brad (Sally), as well as numerous grandchildren and great-grandchildren. As a child he was active in the 4-H and FFA where he showed dairy cattle and participated in leadership activities. He went to Mt. SAC and then Cal Poly San Luis Obispo where he studied Dairy Science. In college he worked on the campus dairy farm and milk creamery. After college, his love of service for his community and the agricultural community grew and he served on the Los Angeles Fair Association, the Dairy Council of California, the Milk Producers Council, Boys Republic, the Chino Rotary, and numerous other organizations throughout the years. As a third-generation dairy farmer, Stan woke up every day before the sun and drove his milk truck to Chino. Once he got home, he then farmed and fed the cows. He was a quiet man who loved his family and community. Stan was a strong supporter of youth in agriculture and supported his local fairs, the FFA and 4-H programs. A celebration of life will be held at 11 a.m. on January 17 at C. L. Smith Hay and Grain; 1387 W. Ramona Expressway San Jacinto, California 92582. Dress will be casual, as Stan would want it. In lieu of flowers, a memorial fund benefiting Southern California Fair Junior livestock exhibitors has been established. Donations can be made to the Stan and Linda Scott Memorial Livestock Scholarship and sent to P.O. Box 640, San Jacinto, CA 92581.