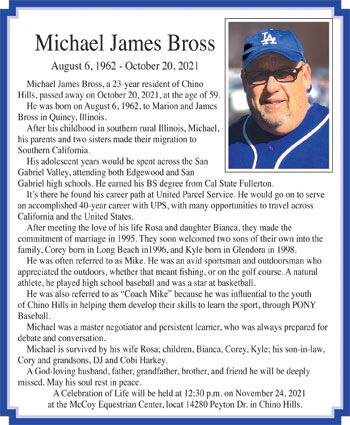 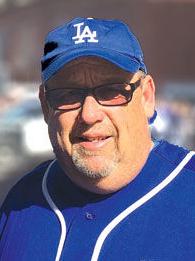 He was born on August 6, 1962, to Marion and James Bross in Quincy, Illinois.

After his childhood in southern rural Illinois, Michael, his parents and two sisters made their migration to Southern California.

His adolescent years would be spent across the San Gabriel Valley, attending both Edgewood and San Gabriel high schools. He earned his BS degree from Cal State Fullerton.

It’s there he found his career path at United Parcel Service. He would go on to serve an accomplished 40-year career with UPS, with many opportunities to travel across California and the United States.

After meeting the love of his life Rosa and daughter Bianca, they made the commitment of marriage in 1995. They soon welcomed two sons of their own into the family, Corey born in Long Beach in1996, and Kyle born in Glendora in 1998.

He was often referred to as Mike. He was an avid sportsman and outdoorsman who appreciated the outdoors, whether that meant fishing, or on the golf course. A natural athlete, he played high school baseball and was a star at basketball.

He was also referred to as “Coach Mike” because he was influential to the youth of Chino Hills in helping them develop their skills to learn the sport, through PONY Baseball.

Michael was a master negotiator and persistent learner, who was always prepared for debate and conversation.

Michael is survived by his wife Rosa; children, Bianca, Corey, Kyle; his son-in-law, Cory and grandsons, DJ and Cobi Harkey.

A God-loving husband, father, grandfather, brother, and friend he will be deeply missed. May his soul rest in peace.

at the McCoy Equestrian Center, 14280 Peyton Dr. in Chino Hills.