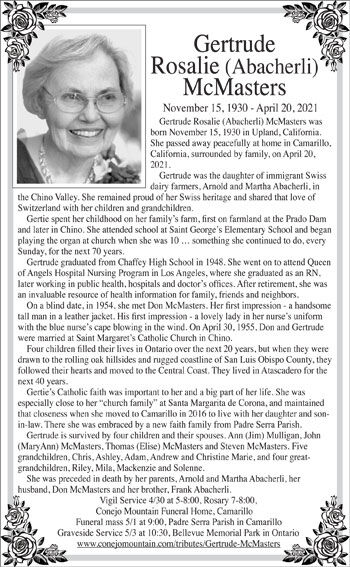 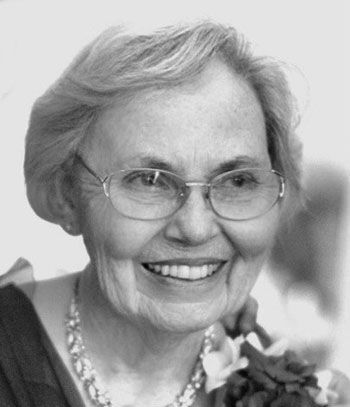 Gertrude Rosalie (Abacherli) McMasters was born November 15, 1930 in Upland, California. She passed away peacefully at home in Camarillo, California, surrounded by family, on April 20, 2021.

Gertrude was the daughter of immigrant Swiss dairy farmers, Arnold and Martha Abacherli, in the Chino Valley. She remained proud of her Swiss heritage and shared that love of Switzerland with her children and grandchildren.

Gertie spent her childhood on her family’s farm, first on farmland at the Prado Dam and later in Chino. She attended school at Saint George’s Elementary School and began playing the organ at church when she was 10 … something she continued to do, every Sunday, for the next 70 years.

Gertrude graduated from Chaffey High School in 1948. She went on to attend Queen of Angels Hospital Nursing Program in Los Angeles, where she graduated as an RN, later working in public health, hospitals and doctor’s offices. After retirement, she was an invaluable resource of health information for family, friends and neighbors.

On a blind date, in 1954, she met Don McMasters. Her first impression - a handsome tall man in a leather jacket. His first impression - a lovely lady in her nurse’s uniform with the blue nurse’s cape blowing in the wind. On April 30, 1955, Don and Gertrude were married at Saint Margaret’s Catholic Church in Chino.

Four children filled their lives in Ontario over the next 20 years, but when they were drawn to the rolling oak hillsides and rugged coastline of San Luis Obispo County, they followed their hearts and moved to the Central Coast. They lived in Atascadero for the next 40 years.

Gertie’s Catholic faith was important to her and a big part of her life. She was especially close to her “church family” at Santa Margarita de Corona, and maintained that closeness when she moved to Camarillo in 2016 to live with her daughter and son-in-law. There she was embraced by a new faith family from Padre Serra Parish.

She was preceded in death by her parents, Arnold and Martha Abacherli, her husband, Don McMasters and her brother, Frank Abacherli.